I love comedy. I love books. It is my personal belief that there’s nothing better than when the two are combined.

I was made aware recently that the hilarious team from Working Dog Productions had taken a potshot at the foodie culture by creating their own celebrity chef, and in turn had her create a cookbook. Now I like my wit drier than a desert, and when a satirical publication is passed off as legitimate, (hello The Onion), I am especially impressed. Particularly if it leaves people a little unsure if they’re being had or not.

Working Dog have amused me over the years with The Castle, The Panel, and Thank God You’re Here, and are made up of members of the D-Generation and The Late Show (seriously funny Australian comedy that I still watch today), and their creation of Audrey Gordon does not disappoint. As she moves to Tuscany to immerse herself in the culture, customs and cuisine, Audrey’s impertinent attitude (she was voted Britain’s Sternest Chef for three consecutive years) makes for compelling reading. There was a joke on just about every page that I found genuinely funny (“The Piazza Pallazzio has genuine period charm. Each of its 66 rooms boasts antiques such as Etruscan rugs, four-poster beds, vases and dial-up internet”), and I am an exacting comedy consumer. I’m a tough nut to crack.

All the recipes included in the book are real, and actually quite delicious. I’m told the book is “a practical guide that will help you carry off everything from a lazy Sunday brunch with friends to a formal sit-down banquet for 300 lactose-intolerant, diabetic vegans with severe peanut allergies”. You can’t get more helpful than that.

I decided to put the roast vegetable salad to the test – something easy I could throw together, but still be delicious. Given that it is getting into cooler weather too, a salad sort of needs to be a bit hotter and heartier to go with your meals This will do the trick! 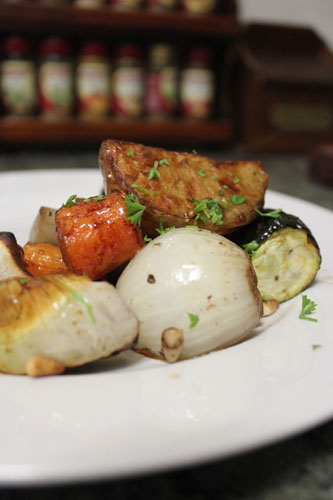 2. Place the potatoes in a saucepan of water and bring to the boil for 5 minutes until they’re just turning soft, but not cooked.

3. Put the potatoes in a large bowl along with the sliced onion, carrot, garlic cloves and zucchini. Sprinkle with rosemary, thyme and a good slug of olive oil. Toss to coat the vegetables with the olive oil then season with salt to taste.

3. Spread the vegetables on an oiled baking tray and bake about 35 minutes until they begin to brown around the edges.

4. Stir in the cherry tomatoes, and continue cooking for a further 15 minutes.

6. Toss the roast vegetables in a large bowl with the pine nuts, parsley and balsamic vinegar.

Audrey’s Tip:
Heat is the very essence of cooking. It’s what causes individual ingredients to lower their barriers and intermingle with each other, eventually yielding to the moment, rather like vodka at a dinner party. That said, it’s imperative that you use no more and no less heat than is needed. The last thing one wants is to startle the garlic or flummox your onion.