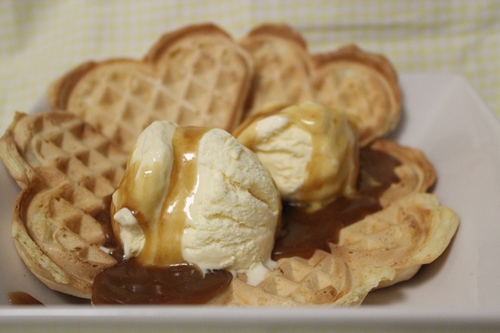 Waffles were definitely something I never ate until I was an adult. That whole small-town girl thing, supermarket didn’t stock such nonsense, and people definitely didn’t have their own waffle irons. I’m not entirely convinced they were even available in Australia.

My mama bought me one for Christmas when I was about 23, and I was far too excited than a normal person would be at the prospect of making my own waffles. My only problem was I didn’t have any kind of electric beater (or even hand-cranked one) with which to beat my egg whites, as the recipe suggested.

That so didn’t stop me. I sat in front of the tv with a big bowl, some egg whites and a whisk and beat them by hand until they were firm enough. No kidding. It took me about an hour and I never, ever did it again. That poor waffle iron got put back into the cupboard until I could afford electric beaters!

I still don’t have electric beaters, or a mixer of any kind. but I DO have an electric whisk attachment to my stick blender! Ya gotta do what ya gotta do. Some people still look at me incredulously when I tell them I beat my butter and sugar by hand. I like to think it’s because I’m old-fashioned and I enjoy having one bicep bigger than the other, but it more truthfully is because I’ll never in my whole life ever be able to afford a KitchenAid mixer.

For these waffles, I used the basic waffle batter recipe that came with the waffle maker (whoa, extreme! I know!), except I added mashed banana to it. Easy peasy.

You got a door? You got a gym!

Directions:
1. Bring all ingredients to a boil in a saucepan, then let simmer, stirring, two minutes until thickened.