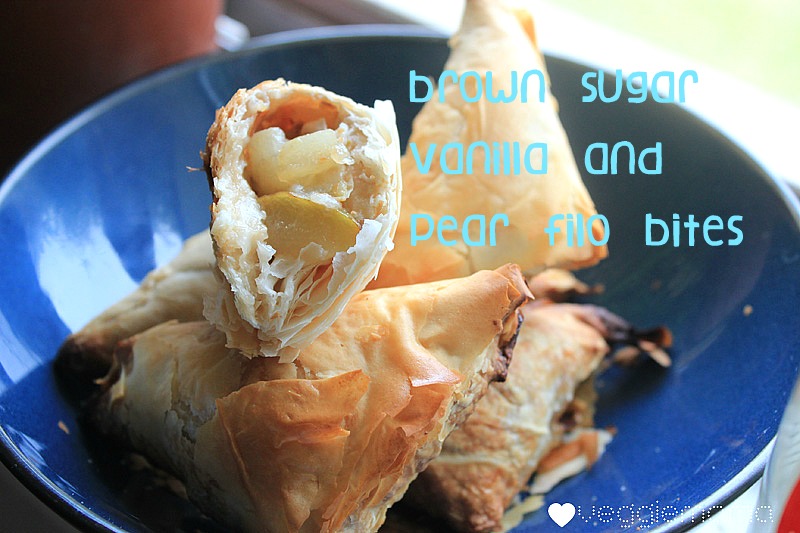 Lately I’ve become almost obsessed with using up food I would normally throw out. It’s a good habit to get into and I’ve always done it to a degree, but now it’s getting ridiculous. Being poor really helps cement that practice in one’s kitchen ways, but when I grew up and had more money I got complacent. Now I try to remind myself that just because I can buy some more, doesn’t mean I should. Or it doesn’t mean I should not try to make use of that which isn’t perfect.

I’ve always made quick little apple pies out of puff pastry scraps, but when I went to make a veggie filo the other day, my filo had all broken into long strips and was probably only useful for making a mess. Although working with filo makes me want to rock silently in a corner and suck my thumb, I persevered and tried to salvage what I could.

I mixed one pear, diced very small, with a dash of vanilla extract and a sprinkle of brown sugar. I took the long pieces of filo, peeled a couple of layers off, and put a teaspoon of the mix at one end. I then folded the corner over, and kept folding the bundle until it made a reasonably neat little triangle at the other end.

You can brush these with whatever you like, or leave them unbrushed, but I used egg for some and milk for others. I baked at 180C until golden brown.

I totally then ate the lot, after dipping into a bowl of cream. Don’t judge me.


Anyway, as far as salvaging that which would normally be discarded, this is one of my more delicious outcomes. No complaints here!