I have a confession to make.
I love kids movies.
My very first movie I ever watched at the cinema was Bambi. I am still not over his mum dying in that forest.
I’m not ashamed to say that two Christmases ago, I was given a copy of The Land Before Time on DVD. As a gift. I didn’t even have any children then. I still religiously watch The Care Bears Movie.
When I was asked to throw a Cars 2 party in honour of the movie recently being released on Blu-Ray, my brain went into overdrive – I love a party, I love a theme, I love excited kids and I damn well love Pixar movies and I don’t care who knows!
I recruited my sister, who has a six-year-old boy, a two-year-old girl and an incredible knack for throwing a good party. She was hassling me for weeks before this went down, ideas all tumbling out of her head and money tumbling out of her purse as she bought more and more themed things. Girl is SERIOUS about this stuff. 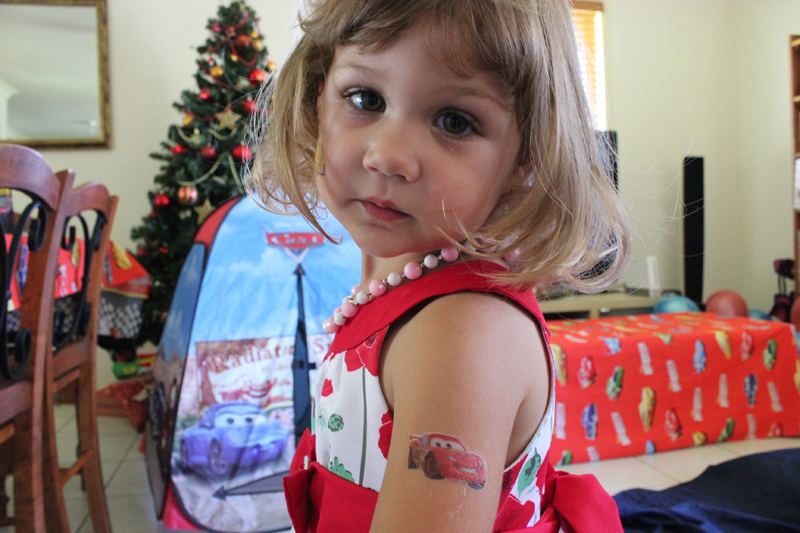 She insisted that all partygoers have Cars tattoos. This is her painfully cute Miss 2, Jasmine. 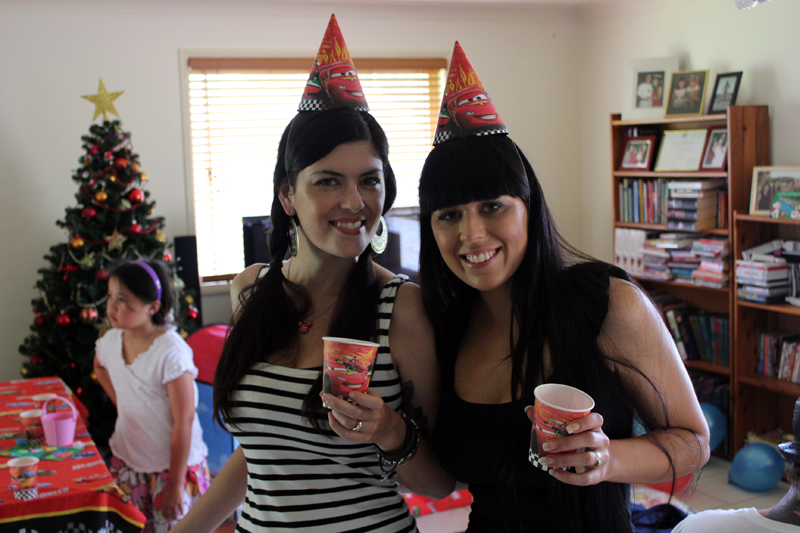 We are big kids at heart. We are the loudest, the most excited, the most dressed-up kid-party-goers you ever saw. In fact, I’m going to go so far as to say we were more excited about the party than the children. But that didn’t last long! 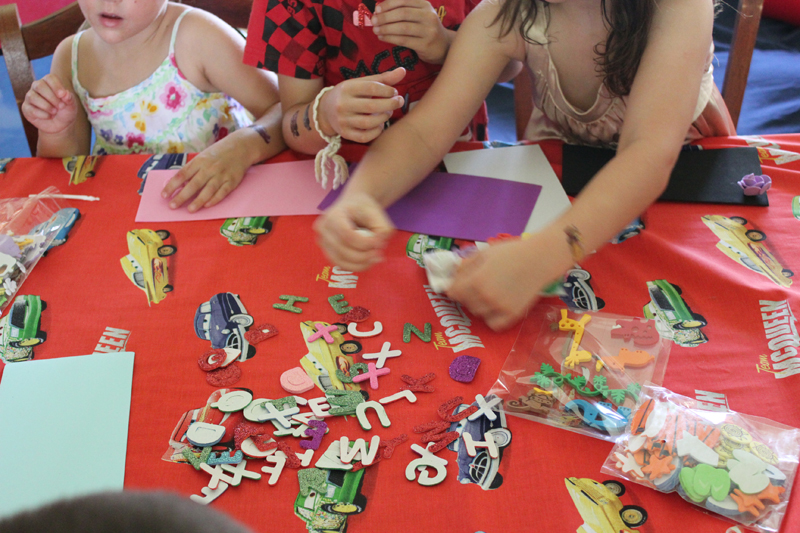 First up on the list was the little attendees making their own licence plates. We got a tub of foam shapes and letters from K-Mart and let them go wild. 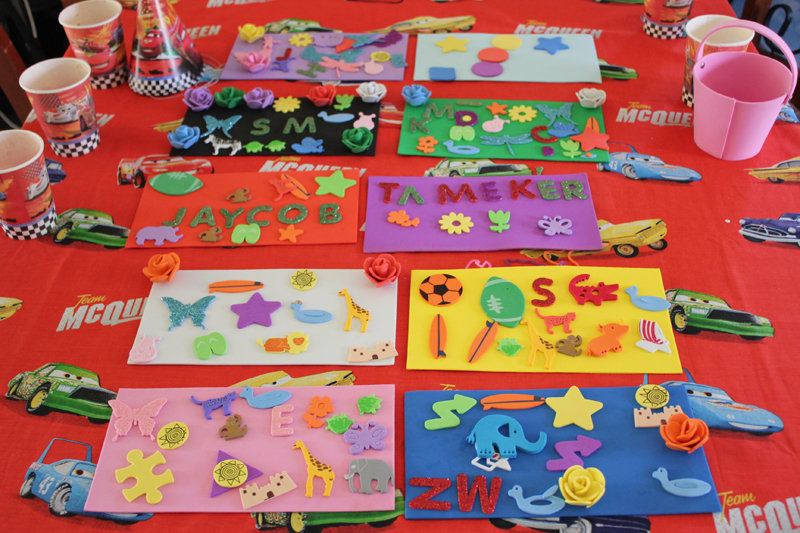 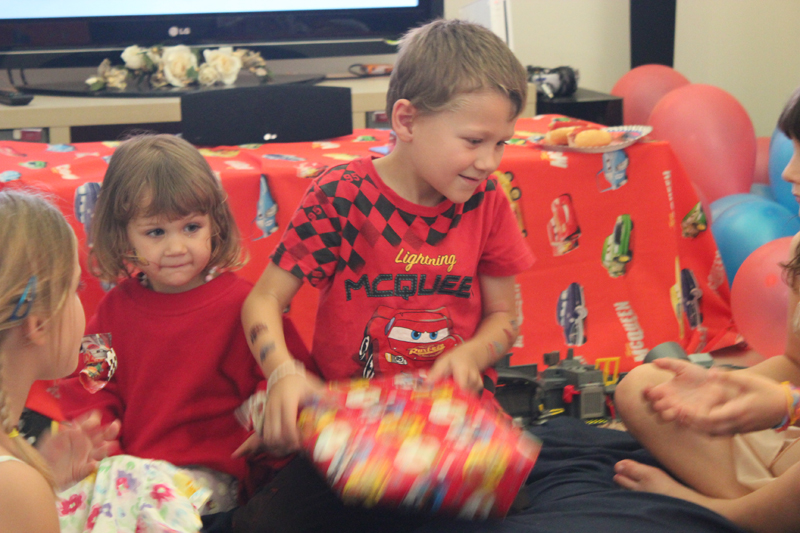 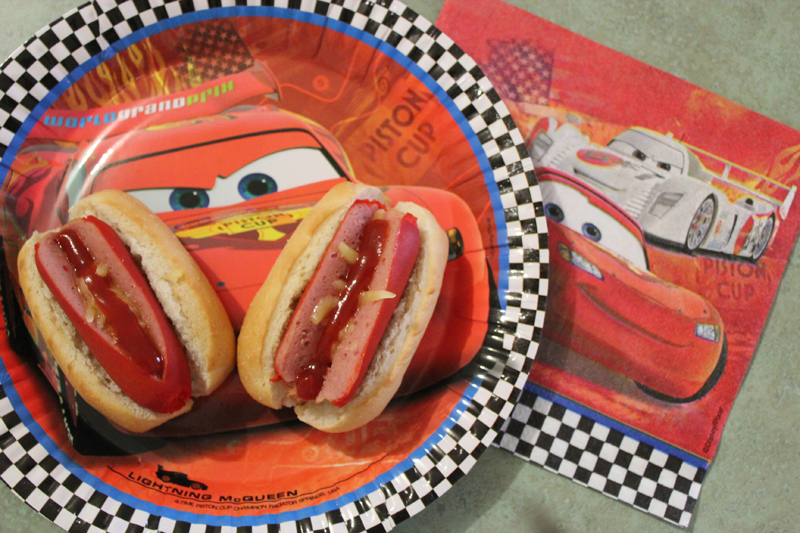 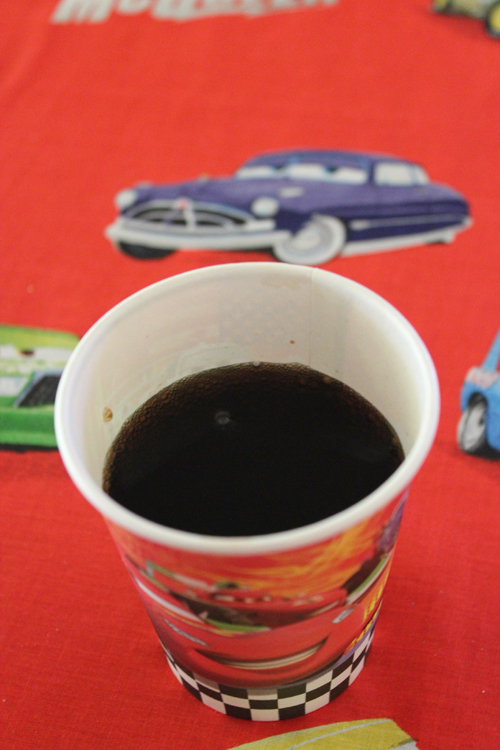 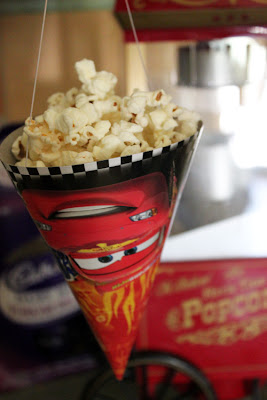 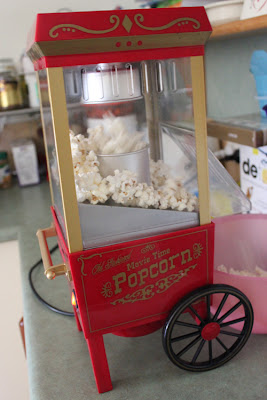 We made a ton of popcorn in readiness for the grand premiere, and my genius sister had me put each portion into everyone’s party hat. Genius. 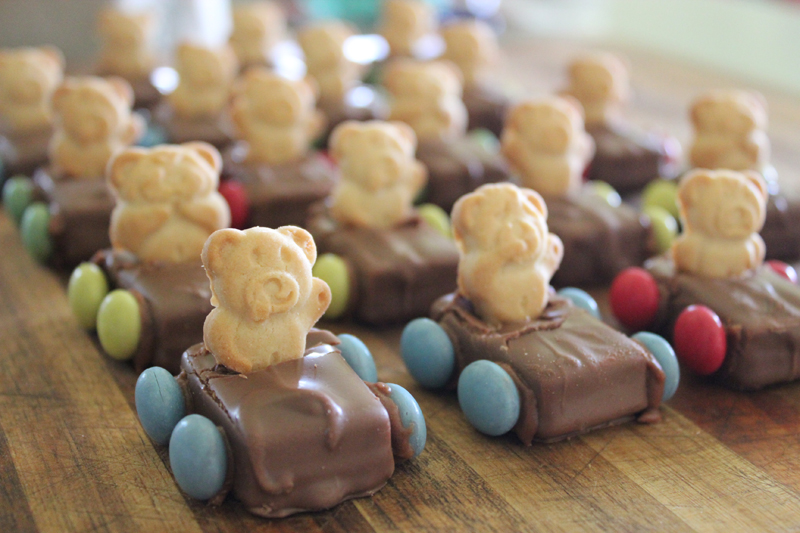 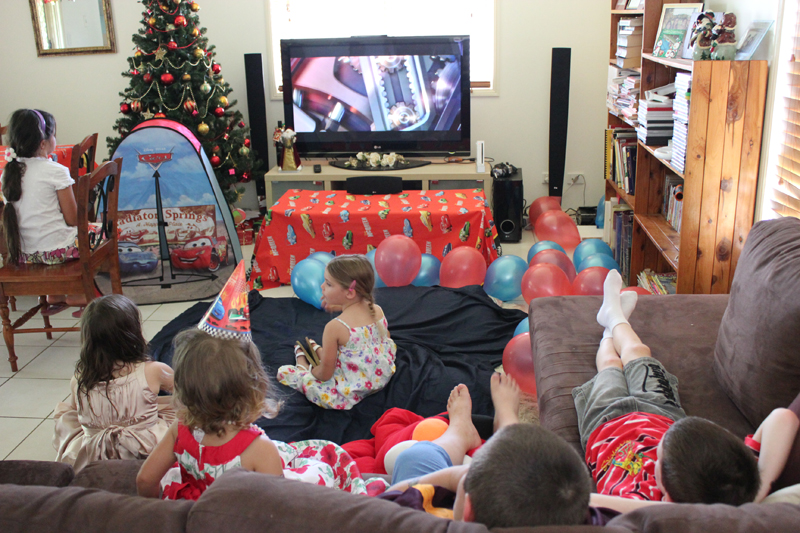 We had a ton of pillows and blankets on the floor, kicked the adults out and turned it up real loud. Everyone got comfy, chilled out and ready to kick back and watch. 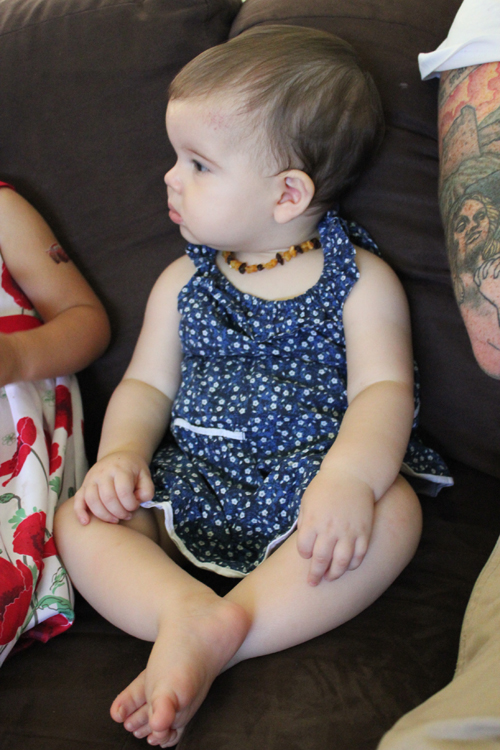 Even that ridiculously adorable, precious, incredibly biteable Veggie Baby. This post is in no way biased.
Look at those lips.
Sigh.
And those little crossed legs.
Hanging out with the big kids.
SIGH. 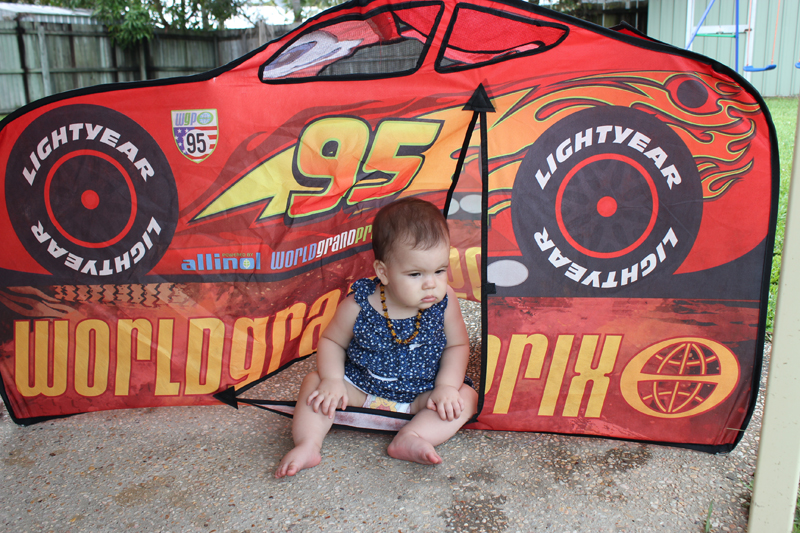 Gettin’ all squished and slumpy in the cool pop-up tent. 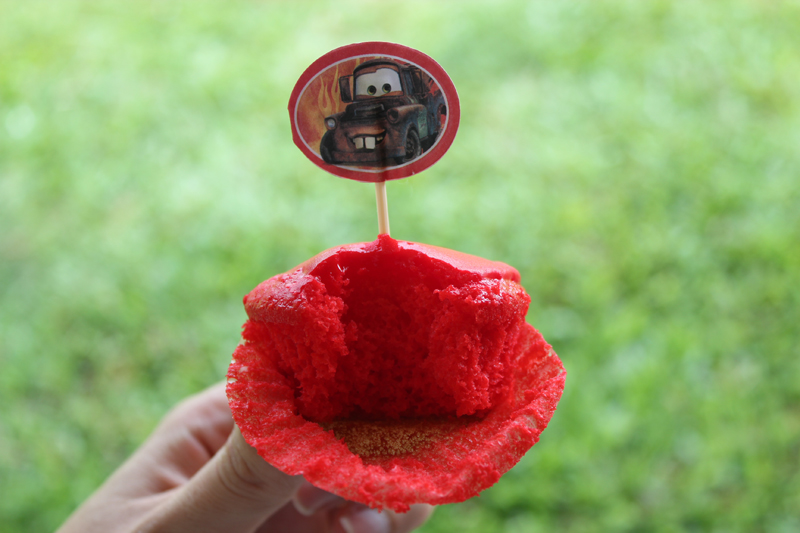 We made super-duper totally red cupcakes and gave each kid about seventeen then sent them home to their parents. MUHAHAHAHAHAHAHAHAHA!

We also filled Cars party favour bags with Cars crayons, colouring and activity sheets, whistles, balloons, candy and various other bits and pieces to take home.
It was a bit fun.
Hey Veggie Dad… we should probably have another baby. 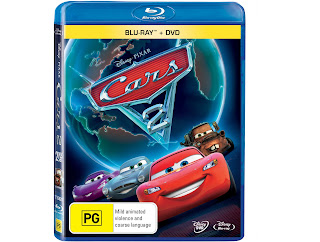 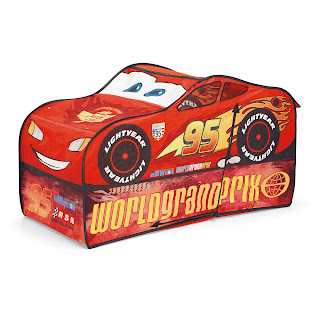 Meanwhile, Thanks to Pixar, I am giving away a copy of Cars 2 on Blu-Ray and an uber-cool pop up tent! Slouchy baby not included.

All you gotta do is leave a comment telling me what is your favourite Pixar movie and why. I’ll pick the answer I like the most. I’d like to do it randomly, but apparently the law frowns upon that… so I hope you don’t mind this way!

The competition will close at 8am Saturday January 14.
The lucky winner will be notified on the blog and by email.
Entry is open to Australian residents only.
Prize pack is valued at $74.99.
*Disclaimer – to celebrate Pixar’s 25th birthday (I know, can you believe it?!), I was sent a Cars party pack that included cups, plates, napkins, a pop up tent, favour bags, activity sheets, Cars 2 on Blu-Ray, Toy Story 3 on DVD and Cars Toys, which we used as prizes for the games. If you think that receiving any of this has influenced my opinion in any way, you are a twit.
Previous Post: « The Big Reveal: Tattoo Edition
Next Post: Veggie Meal Plan »