This is what I was doing this time last year – watching the fireworks over the National Mall in Washington, DC. 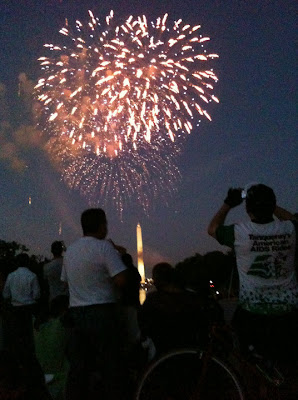 I was sitting on a blanket that was only barely keeping the burning concrete from my delicate leg flesh. It had been a super-hot day, the news stations and papers filled with pictures of children sitting in buckets under hoses, and talk of record-breaking temperatures. It was over 40C, so hey – that’s HOT ENOUGH for me!
I had presented my sweaty face to the Lincoln Memorial, 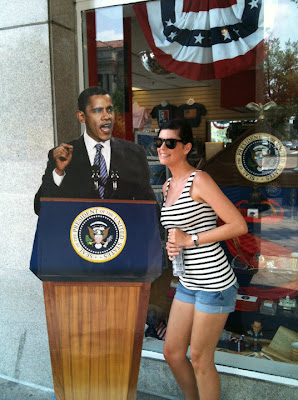 I had gotten up close and personal with President Obama, 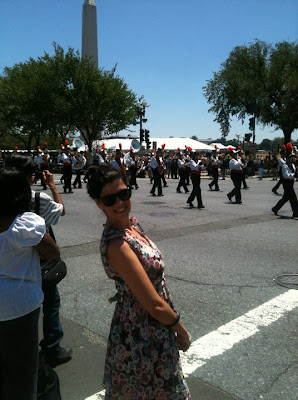 I had watched the annual Independence Day parade along Constitution Avenue – lots of marching bands, baton-twirling and giant-helium-balloon-holding. I had waded through a throng of patriotic people to be that guy that gets their photo taken with the White House. I also nearly got my head taken off when I stepped a toe outside the barrier keeping people on the sidewalk. At least I wasn’t part of the crew getting their photo taken with the back of the President’s house…
I had sought refuge in the cool interior of the United States Holocaust Museum, and I had stood on the steps right where Dr Martin Luther King, Jr made his “I Have a Dream” speech. I had looked out over the Reflecting Pool and had visions of Jenny splashing into it in search of Forrest Gump. Forrest!
I had also watched the annual Nathan’s Hot Dog Eating Contest at Coney Island on TV from a food court earlier that day (54 hot dogs in 10 minutes, people!), and it was that memory that made me decide what to make to help celebrate this year.
We eat a lot of hot dogs at VMHQ – they’re one of the few mock meats we truly like. Our concoctions usually consist of ketchup, mustard, onion, pickles, relish and cheese. Occasionally we have chili dogs, and occasionally I like to branch out and try something new on my poor guinea pig husband.
This year I decided on Coney Island Hot Dogs, which are very specific in their preparation. We couldn’t help but doctor them up somewhat, although I’ve made them here in their original veggie form.
Not actually made in Coney Island, but in Michigan, the hot dog is topped with a beanless chili, a strip or two of yellow mustard, and lots of chopped white onion. 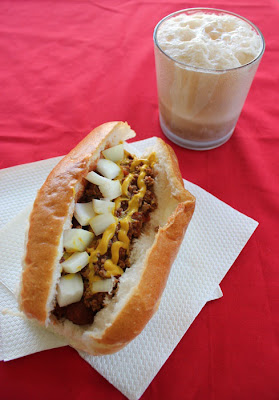 And it is good.

Especially when you add extra ketchup and cheese… 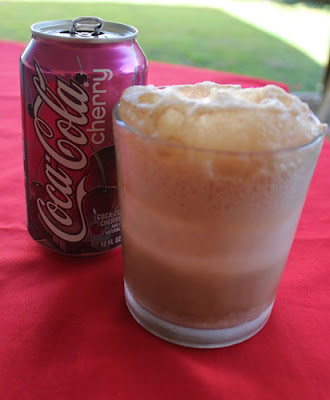 And a Cherry Coke Float.

What’s my deal with celebrating American holidays? Well I talk about it here and here and here. And how it all started? That’s here.
Happy Fourth of July!
To make the chili:
Heat one 300g packet veggie mince with one can diced tomato and 1/2 cup water. Add 1/2 teaspoon cumin, 1/2 teaspoon ground coriander, a sprinkle of cinnamon, basil and as much chili powder as you want. Add a crushed veggie beef stock cube. If it is still too soupy, you can thicken it with a teaspoon of cornflour in a tablespoon of hot water.
To make the float:
Ice cream. Cherry Coke. Mix.
Previous Post: « Vegetarian Shepherd’s Pie
Next Post: Meet FOODO – My Blogopolis sponsor! »