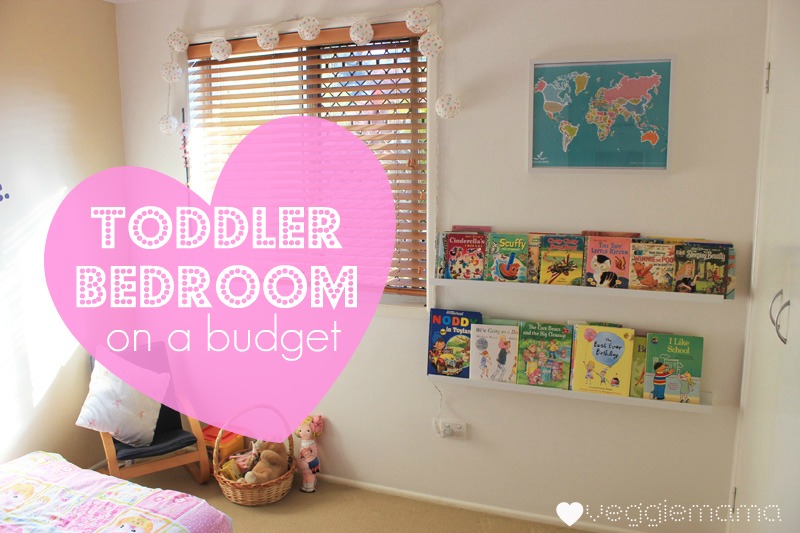 I didn’t really do much with Abby’s nursery when she was a baby. I bought some owl-related owl things and put them up… they were all white. We didn’t know the gender, and to be honest that would hardly have swayed me. Things she received went on shelves and pictures went on walls with no rhyme or reason.

As you can see, I’ve carried that over into her new room! There are some things I’m mostly drawn to – pictures of world maps, LOTS of books, and handmade or retro toys, teddies and dolls. If you want a theme, then there they are! But it’s haphazard and certainly not colour-coordinated. Nor is any of it expensive. The one thing I knew I desperately wanted was this shelf idea for books. Just about the only thing I’ve ever actually done after seeing it on Pinterest! The shelves were $7 each from Ikea. The books are almost all thrifted, given to us, or were mine as a kid. I love the vintage ones the best and will always stock up when I find some. The ones with the records to read along to are my favourite! I remember them from when I was little.

The map is actually a pull-out from issue 42 (July/August) of Frankie Magazine, making it pretty much free. The frame is a cheapie from KMart… less than $5.

If you want a map of your very own, you can buy it from here. 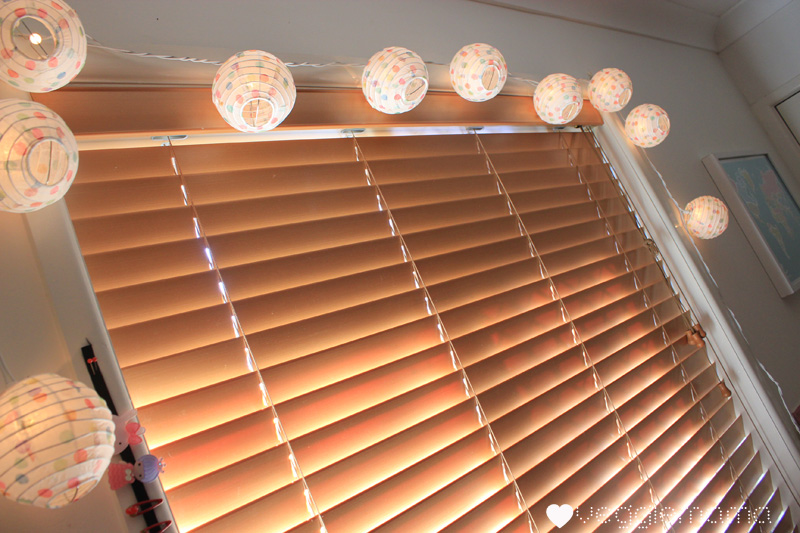 The polka-dot lanterns were $20 from Typo and probably the closest you’ll get to my idea of the colour scheme of this room. If there really was one. 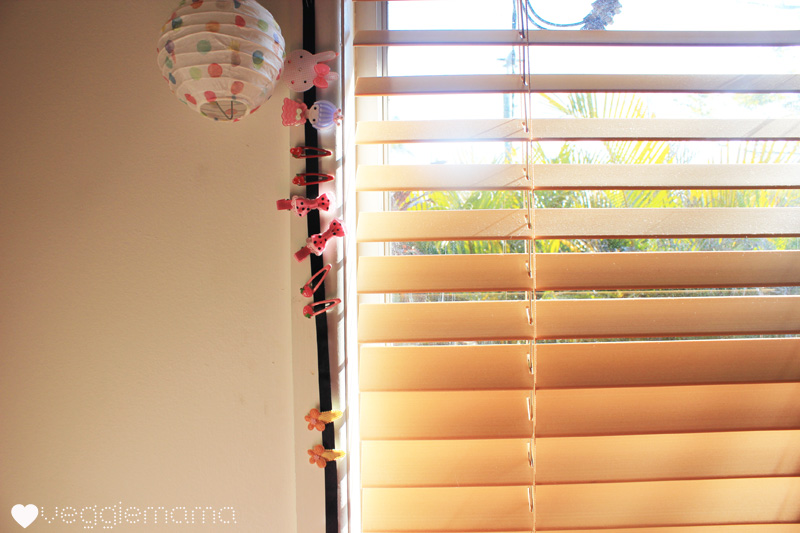 All Abby’s clips are stuck to a piece of ribbon I had spare. I was inspired by this post at Cakies blog. This was as far as I got! It looks nothing like the gorgeous creation Rubyellen made, but it’s functional… Aldi had a world map with felt bits you can stick on in all the relevant areas. It was about $20 and will do until I can get this one. Right now it’s up high so she can’t pull all the bits off and lose them, but when she’s older we’ll make it more accessible. 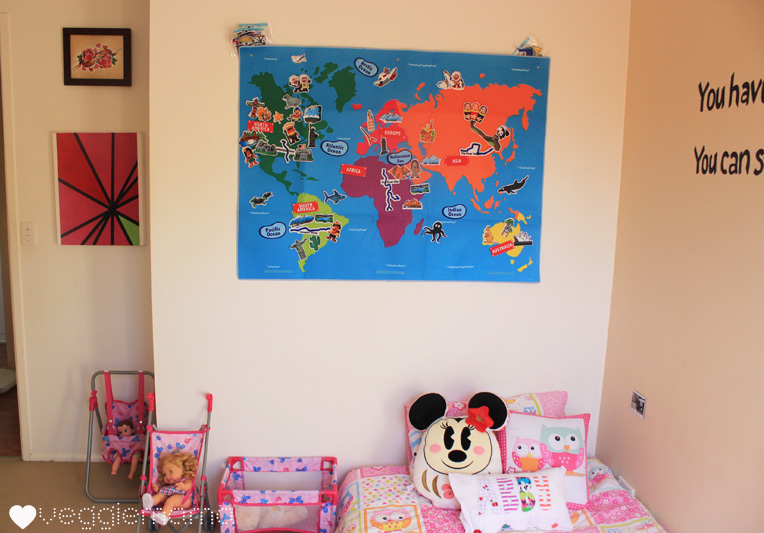 Oh and who could forget the wall mural? It cost me about 13c and two hours of my time. Random assortment of pictures keep a strange little nook interesting. The top left was a gift from a tattooist friend of ours and has Abby’s initials in it. Underneath was made by another talented friend (although his art tends to appear on warehouse walls and the backs of train stations) as a wedding present.

The embroidered picture was made by the gorgeous Cat Beloverly and desperately needs a frame. I must stop being so lazy. 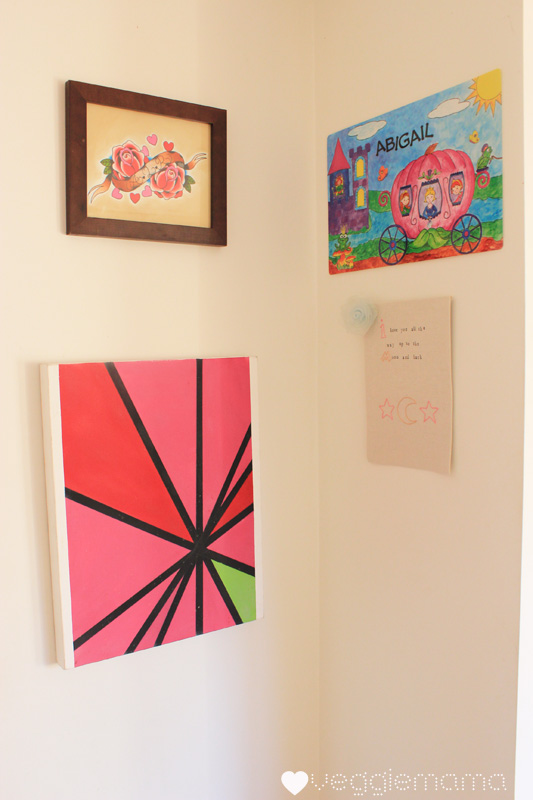 And last but not least, our skateboard shelf. Two brackets from Ikea, about $5 each. Husband’s old skateboard. Well, one of. The most awesome Mr Potato Heads courtesy of Styling You‘s little boy who outgrew them.

One old-school deer jigsaw puzzle I got for $1.50 in a frame from KMart that was about $4.

The canvas with Abby’s name on it was a gift from her aunt. 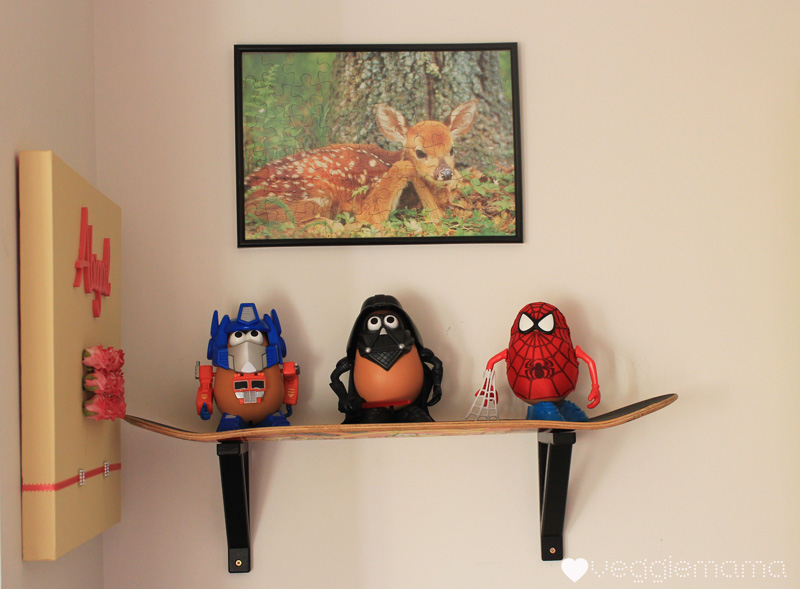 Cheapie bookcase from Sam’s Warehouse or something similar that I put together myself and used to house one of my vintage book collections. It now houses vintage knick-knacks I collected over the years, handmade dolls, a Rilakkuma bear from Kiddyland in Harajuku, Japan, Mickey ears from Disneyland, a Rainbow Brite and sprite and a couple of Cabbage Patch Dolls, one of which I’ve had since 1984. She has seen BETTER DAYS.

The Rilakkuma was probably the most expensive thing in that whole bookshelf. 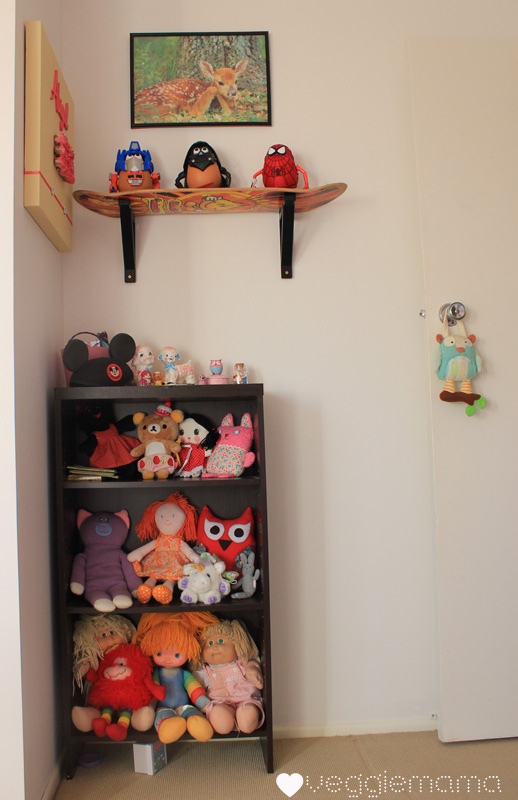 Oh and grubby old ted. He was $3 from the markets, an authentic ’80s Carebear we could never afford so I never had, and in perfect condition. He is now very much loved and filthy. There you have it. Some budgetty-budget ideas. I don’t like the idea of a thousand useless toys (you can blame my mother for the pink plastic fakery of above) and I much prefer one-off things or handmade or recycled stuff. I also don’t like spending a ton of cash! Not that I have a ton to spend…

Do you have cool low-cash tips? Did you go ALL OUT with kid bedrooms? Have a post to share? I’d love to see!

Previous Post: « Kid food: breakfast
Next Post: I went to the Real Food Festival in Maleny and now I want chickens. »