So a little while ago I tried the new Garnier tinted moisturiser and I’m a convert. Probably due to my inherent laziness (It does five things at once), but I can’t ignore the fact that it smells good too. Oh – and it works. 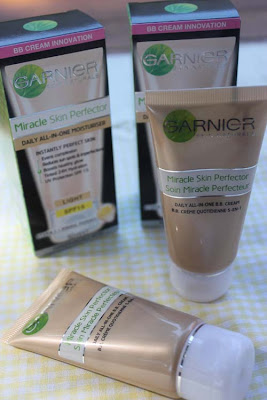 I had 10 packs to give away to lucky readers who told me what they would do with the extra few minutes on their hands that the Miracle Skin Perfector would give them. Yes, it’s actually called that.
Congratulations to the following lucky ladies… who incidentally gave me a good giggle. I’m endeavouring to email you all 🙂
SallyLeigh: I would LOVE to win these creams! I live in QLD and have fair/uneven pigmented skin from the sun, even though I try to cover up as much as possible.

I want to get back into using my tarot cards so I’d try to use the extra time in the morn to stop making excuses and do a quick layout each day.

Macsnorky: Sounds like a fabulous product! Having my morning routine shortened would mean I could squeeze in reading one or two more blogs 😉
Amy S: If my face routine was shortened that’d be lovely, because right now I don’t actually have much of one at all. And I want to. I’d spend the time giving my daughter that one extra cuddle and neck sniff that there’s never enough time for in the morning, I could always use 5001 of those instead of just 5000. I’d also take the time to pack a healthy lunch and feel confident that I look my best instead of worry about lunch when I’m hungry and feeling that I’ll look my best again when my daughter is 18 & left home.
Slightly Deep: This looks good! With the extra time I’d probably spend an extra 5 minutes of the computer! 🙂
Meli: I would in snooze once more, like I wish I could every morning, spoon my cat longer and savour every sip of my morning coffee!
Linda Courtney: My girls would probably get to the bus on time.
Ohmylolly: I would actually be able to get my hair done! Stupid curly hair takes forever to style! And instead of having more time really it may mean that I actually wouldn’t be late… Maybe…
Super Sarah: I would read my book on the loo, one of my favourite activities that is much neglected since having children and not getting ANY private time in the toilet!
Susan @ Living Upside Down: Extra time in the morning? Is that possible? If such a thing did exist I would use it to take a few deep breaths to calm myself admist the morning rush of getting 3 children out the door to school. As much as I would love this prize, you can believe that my kids would love it more if it means a less stressed out morning Mum. 🙂
Kelvis: If i had more time in the mornings I would go to a Yoga class and get my hippy on before work so i didn’t feel so frazzled before even starting! ahhh zeeennnnnn
Thanks for playing, everyone! Stay tuned for another giveaway coming up soooooonnnn…
Previous Post: « Japanese potato salad
Next Post: Lentil and Balsamic Tomato Pappardelle »