Today the year 12s at my husband’s school are graduating, as are many excited 17-year-olds around the country.

It got me thinking about the year I would have graduated, had I not decided Timezone was a better place to hang out from 9-3 on a weekday. I left school in term 2 of Year 11, spending my time stalking people at Hungry Jacks and smoking cigarettes with the other cool kids down in Freo and pooling our money together for a cask of Wild Peach.

When we weren’t choking down warm goon, we were drinking a horrific blackcurrant alcopop concoction called Vault. They had a little tag around the bottle that became ultra-fashionable to wear around your neck. 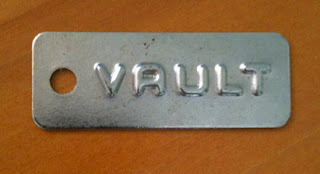 Yes, I still have mine.
So while I was wasting time at Chelsea’s ordering chips with chicken salt and sour cream,
I dare say I should have been doing any one of these: 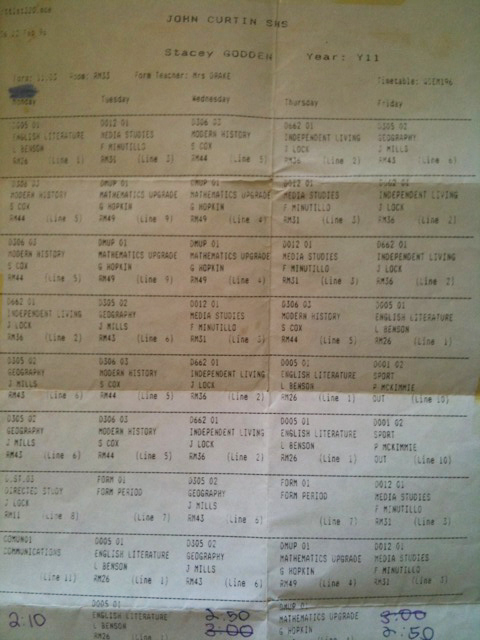 And because I would just walk out of any class that was boring me, I ended up with these:
So I sorta just stopped going.
To this day I’ve no idea why I did these things… I wasn’t stupid, but I didn’t have a lot of self-esteem, so was always doing what the cool kids were, even though they probably thought I was a complete douche.
What did made my last year of school so amazing was my best friend Kylie. I’d never really had a best friend before. Well, one that didn’t bully me every opportunity they got. You know, best friends one minute, the next they’re spreading rumours that I tried to steal the guy they like when I’d never even seen the guy before. Anyway, Kylie and I were prolific letter writers, and I have everything she’s ever sent me in the last 14 years. But these ones are still my favourites: 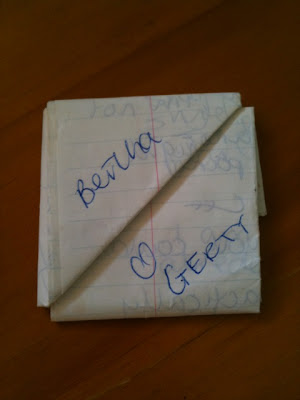 And I quote:
“Gwennie,
Figure this out…
“Find the equation of the line perpendicular to 3x – y = 1 through the point (6,1)”
I am now in English, if you couldn’t already guess.
I am now practically counting the minutes until we meet.
5 hrs and 15 minutes to go.
Hopefully Josh will be in Freo as well.
Did Jessi the long-haired dream guy ring you last night? They were going to ring you first but Jessi’s shy around you apparently, I’m not sure.
Jessi reckons you’re a bit alright. What are you going to do? If Jessi asks you out?
Are you going to see him? He’s so cute.
Well gotta cruise,
End quote.
For the record, I never even saw this Jessi in person, ever. We did speak on the phone a couple of times, and it was awkward. Which is practically the law for teen telephone conversations. And he never asked me out.
The following year, Baz Luhrmann released an album with The Sunscreen Song on it, dedicated to the Class of ’97, which I would have been in. And what I was doing instead is a story for another time. Perhaps even another blog. But I digress. The words in this song/speech I think are worthy of repeating. And because I hate sitting through videos, I’ve also provided them underneath for those who feel the same.
Ladies and Gentlemen of the class of ’97.
If I could offer you only one tip for the future, sunscreen would be it.
The long term benefits of sunscreen have been proved by scientists, whereas the rest of my advice has no basis more reliablebthan my own meandering experience…I will dispense this advice now.
Enjoy the power and beauty of your youth; oh nevermind; you will not understand the power and beauty of your youth until they have faded.
But trust me, in 20 years you’ll look back at photos of yourself and recall in a way you can’t grasp now how much possibility lay before you and how fabulous you really looked….You’re not as fat as you imagine.
Don’t worry about the future; or worry, but know that worrying is as effective as trying to solve an algebra equation by chewing bubblegum.
The real troubles in your life are apt to be things that never crossed your worried mind; the kind that blindside you at 4pm on some idle Tuesday.
Do one thing everyday that scares you.
Sing.
Don’t be reckless with other people’s hearts, don’t put up with people who are reckless with yours.
Floss.
Don’t waste your time on jealousy; sometimes you’re ahead, sometimes you’re behind…the race is long, and in the end, it’s only with yourself.
Remember the compliments you receive, forget the insults; if you succeed in doing this, tell me how.
Keep your old love letters, throw away your old bank statements.
Stretch.
Don’t feel guilty if you don’t know what you want to do with your life…the most interesting people I know didn’t know at 22 what they wanted to do with their lives, some of the most interesting 40 year olds I know still don’t.
Get plenty of calcium.
Be kind to your knees, you’ll miss them when they’re gone.
Maybe you’ll marry, maybe you won’t, maybe you’ll have children,maybe you won’t, maybe you’ll divorce at 40, maybe you’ll dance the funky chicken on your 75th wedding anniversary…what ever you do, don’t congratulate yourself too much or berate yourself either – your choices are half chance, so are everybody else’s.
Enjoy your body, use it every way you can…don’t be afraid of it, or what other people think of it, it’s the greatest instrument you’ll ever own..
Dance…even if you have nowhere to do it but in your own living room.
Read the directions, even if you don’t follow them.
Do NOT read beauty magazines, they will only make you feel ugly.
Get to know your parents, you never know when they’ll be gone for good.
Be nice to your siblings; they are the best link to your past and the people most likely to stick with you in the future.
Understand that friends come and go,but for the precious few you should hold on.
Work hard to bridge the gaps in geography and lifestyle because the older you get, the more you need the people you knew when you were young.
Live in New York City once, but leave before it makes you hard; live in Northern California once, but leave before it makes you soft.
Travel.
Accept certain inalienable truths, prices will rise, politicians will philander, you too will get old, and when you do you’ll fantasize
that when you were young prices were reasonable, politicians were noble and children respected their elders.
Respect your elders.
Don’t expect anyone else to support you. Maybe you have a trust fund, maybe you have a wealthy spouse; but you never know when either one might run out.
Don’t mess too much with your hair, or by the time you’re 40, it will ook 85.
Be careful whose advice you buy, but, be patient with those who supply it.
Advice is a form of nostalgia, dispensing it is a way of fishing the past from the disposal, wiping it off, painting over theugly parts and recycling it for more than it’s worth.
But trust me on the sunscreen…
And simply because John Safran rules, I am posting his follow-up that he released the next year. So amazing, so hilarious, so Australian.
Long live the Class of 97!
Previous Post: « In honour of the royal engagement: Eton Mess
Next Post: Custard Tart »