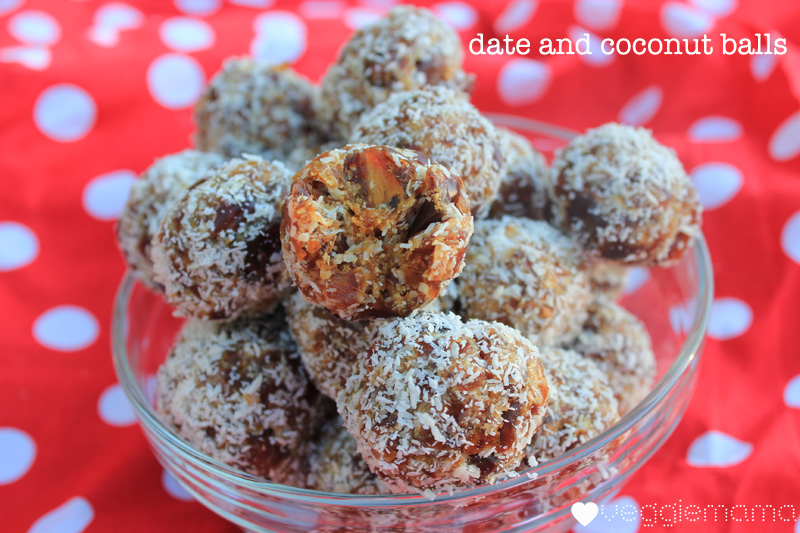 Back when I was looking for portable, home-made snacks for Abby I went through the usual – slices, biscuits, etc and even though I could make them reasonably healthy, I couldn’t make them last longer than a couple of days. I do freeze muffins and things and that helps, but I wanted something that was quick, small and very portable.
Enter date and coconut balls. I know there are recipes for other sorts with lots of ingredients, but I wasn’t interested in that much faffing. One day I brought home some organic dates and organic coconut. I’m not usually that fanatic about organic stuff, but the bulk bins at my local health-food store are pretty much all organic so I go with that! Anyway, I figured I could work out the ratio at home.
Dutifully, I put the dates and the coconut in the food processor and…. nothing. hard lumps and nothing like the sticky mixture I was expecting. It appears those dates had pits and my experiment failed miserably! That is, until I cut out the pits, mixed the date and coconut mixture with apple and made a date and apple crumble, which I ate with a hell of a lot of cream, and Abby just mushed in her fingers and shoved in her mouth.
Next time I just grabbed a 500g bag of PITTED dates (duh), 1 cup of coconut, and mixed it in the food processor. I rolled the resulting mixture into little balls and rolled into coconut. What you see above is the quantity, which did Abby pretty well for about a week. They do last in an airtight container, so you might want to make more for larger families. 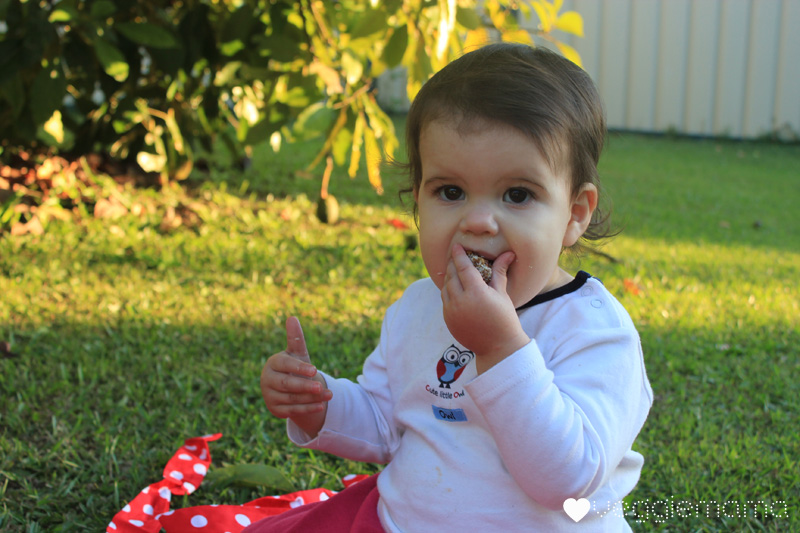 Although I wasn’t sure how they would be received, her natural curiosity got the better of her and she didn’t even wait until I had finished photographing them before she snatched one and got stuck in.

They were a HUGE hit. I can’t even describe how excited she got every time she was offered one. And I’m like “dude, they’re dates… what’s to get excited over?” but she thought they were the best treats ever. We used them as insurance on the plane to Melbourne as we knew it would be a sure thing to get her to sit still and be reasonably quiet if all else failed. She was actually pretty manageable thank goodness, but every day during our trip we packed three in a box with some other snacks and they were the first to go. She would immediately cram one in her mouth and attempt to pick the other two up in one hand. Had to be holding all three at once. I was covered in date-flavoured spit most of the time. Classy.

Anyhow, they’re now on constant rotation here, although I am cognisant of the natural sugars being quite concentrated and the fact that the dates can stick to her teeth so they’re not an everyday thing. But damn, are they handy! (Update – Abby’s dentist said the grooves in her teeth are not very deep, so with regular brushing like we normally would, dried fruit is a fine treat to serve without too much concern. YAY!)