I have few food rules when it comes to feeding my 15-month-old kid. As with all of my parenting, I start with a vague idea of what I want, adapt where necessary, stay flexible, and carve out a groove, developing and solidifying my tenets over time. I have noticed certain things I seem to be veering toward and they are:
* Provide a huge variety. Keep trying. I want her to eat widely and not be afraid of food or trying new things. Whether this happens or not remains to be seen!
* No added unnecessaries as the norm. They are ok as an exception/special occasion. Not super-fanatical about this, but as I’m in the kitchen half my life anyway, it doesn’t hurt to make treats from scratch for her.
* Water or milk to drink. She has either organic cow’s milk, soy milk or formula in her bottles. We rotate so she gets used to it all. (not being pretentious with organic bizzo, I just try to buy organic dairy wherever I can. Or stuff from local dairies). She has formula for the one day a week she’s at day care, and I personally find it can be useful for added iron + things that veg kids might miss out on. Especially the ones who only eat toast and grapes for a month. Anyway, no juice at the moment. I really want to avoid a sweet drink habit for as long as I can.
* No food specifically aimed at gender differences because of my massive personal bias about that. Cheese for girls? Effing ridiculous.
* Food as close to either it’s natural state or what we eat as adults as possible. She’s had whole grain bread (WITH the crusts) and natural yogurt and things like that right from the very start. May as well get her used to it now so I’m not forced to cut wonder bread sandwiches into butterfly shapes into high school.
* Food is good, fun, shared with family and hopefully never to become a battleground. They say pick your battles, and food won’t be one of them for me.
Pretty normal stuff, I guess. Food is just a huge deal for me in my life and I suppose I think about it more than usual. But part of my wanting to keep food fun, and partly because I’m  terrifically laid back I’m not obsessive or hypersensitive to it. As long as she eats well most of the time, I’m doing my job.
Anyway, onto the snack stuff she’s been eating lately… 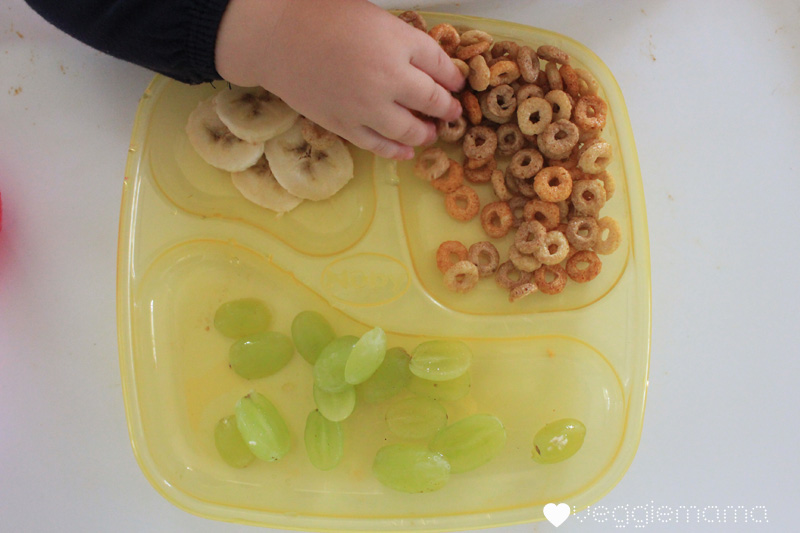 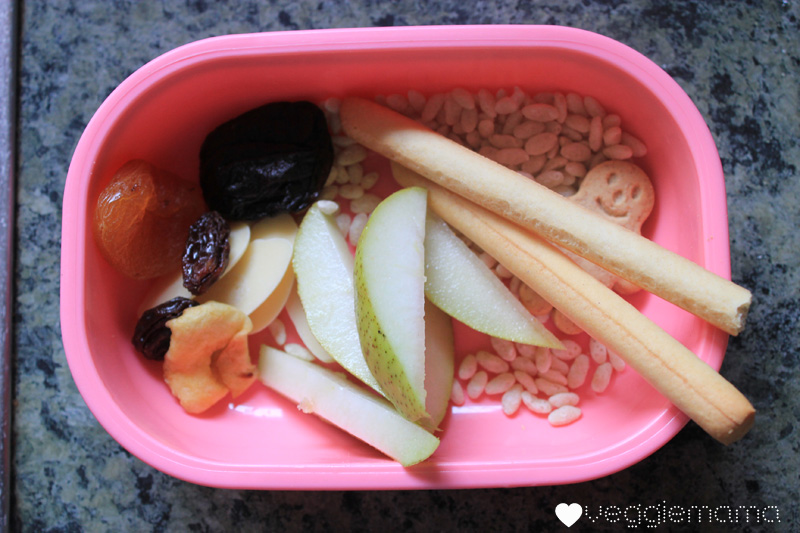 A bit of everything to keep it interesting. An apricot, a prune, some dried apple and raisin, a couple of yogurt buttons, sliced pear, grissini, organic puffed rice (from the bulk bins at the health food store) and a kiddo gingerbread man cookie. (Little Bellies brand)
Plain corn cake, string cheese (hated it), blueberries.
Banana chia muffin and kiwi. Loved it all. 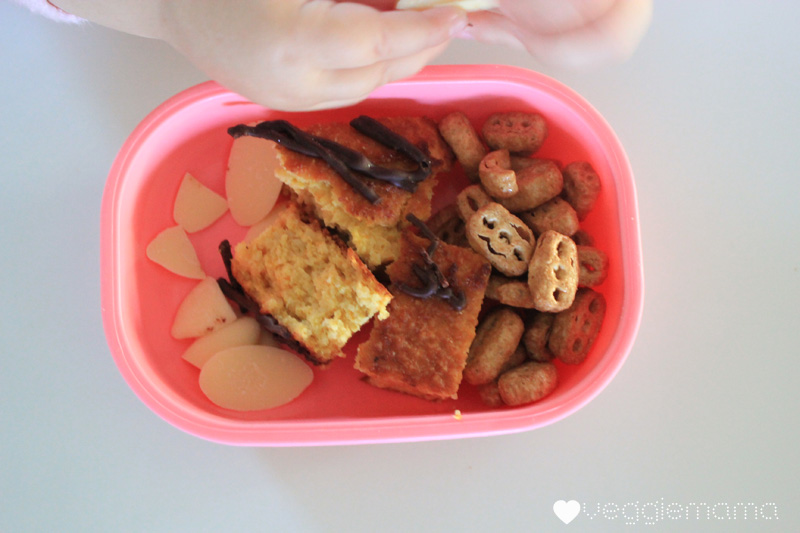 Yogurt buttons, flourless orange cake (courtesy of Styling You!) and Nutri Grain. Not overly a fan, but wanted to offer something other than cheerios for once!
So there you have it. What she eats and why she eats it. Hope it provides a little inspiration! And as usual, I’d love to hear what you do, and if you have any food rules.
Previous Post: « apple + oatmeal cookies
Next Post: Apple, rosehip, lemongrass + ginger compote »