The Audi 2011 Noosa Food and Wine Festival was calling my name. After quite the restricted pregnancy diet (What? No gorgonzola? For nine months?) and a severe wine drought, I was more than ready to immerse myself in foodie heaven. Although I couldn’t really wine it up much, just getting back into the scene was exciting. Veggie Dad and I packed up Veggie Baby and headed to Noosa in the most glorious sunshine I’d seen in a long time. We walked through the festival gate, grabbed a wine glass each, and walked smack into chef Matt Moran.

I have been in the presence of movie stars, famous musicians, eminent heads of state and members of Australia’s political famous. And not once have I ever asked anyone to be in a photo with me. I’ve never been that guy. But before I knew it, the words were out of my mouth and I my big ugly mug was grinning for the camera. Seems people that have a passion for food will get me to find my inner groupie. Who knew?

First up on my agenda was to hear Matt Preston, Gary Mehigan and Matt Moran along with MasterChef Magazine editor-in-chief Trudi Jenkins speak on the MasterChef phenomenon.  They’re excited about how popular the show is, and how it is driving Australians into the kitchen –  anyone from the stop-go man at roadworks baking rhubarb crumble souffle to kids that can temper their own chocolate. They are passionate about the show and what it represents. 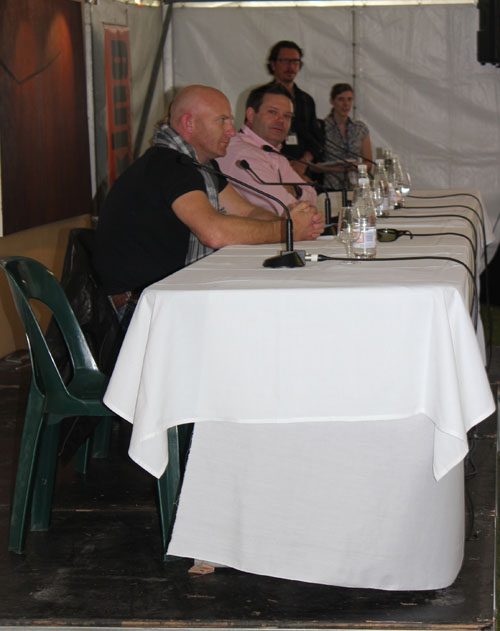 Mr Preston gave the excuse he had to cook for 1000 people in the food critic’s cooking challenge at noon, and was prepping… but I’ve had to turn up for something with a hangover before, and I recognise a good hungover increased water intake when I see it. But he jumped right in with the conversation and was equally as passionate about what MasterChef has brought to cooking in Australia. 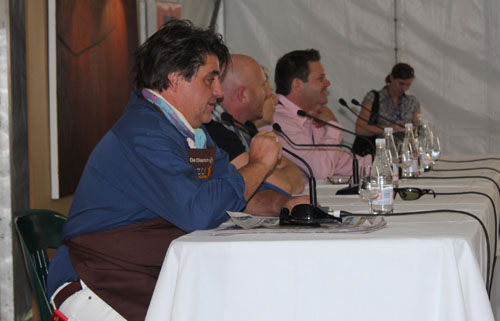 I was one of the lucky few that got to ask the panel a question, and I asked if it was becoming more and more difficult to create harder challenges for the contestants, given that they spend a lot of the lead-up to the show honing their kitchen skills. Gary joked that’s why they brought in Matt Moran this season, and said he’s still yet to have a cooking challenge where he has to hang out of a helicopter. I’m sure it’s only a matter of time…

Besides the Queensland Cheese Exhibition, of which I partook liberally, there wasn’t a lot for me to eat. Chefs love their meat, and it was the integral part of every dish on offer. So I turned to the wines. With particular attention paid to organic and preservative-free, just to see if they stacked up with more traditional winemaking methods.

I took a good look around the gourmet kitchen and homewares expo, and poked my nose into Maggie’s Farm Shop, where Maggie Beer and her daughter Saskia (whom I spied spending a quiet moment with a friend near Hastings Street on my way out) had plenty of gourmet food products to try. It was one of the more packed stalls.

There was celebrity chef cooking demonstrations all day, which were quite well-attended, and plenty of wine masterclasses. Unfortunately I didn’t have a great deal of time to spend there, and with the world’s biggest pram I didn’t get to indulge in everything I would have liked to have seen and done.

But the blue cheese thing? Oh I indulged. And I’ll be back next year.

What would YOU have asked the MasterChef judges?