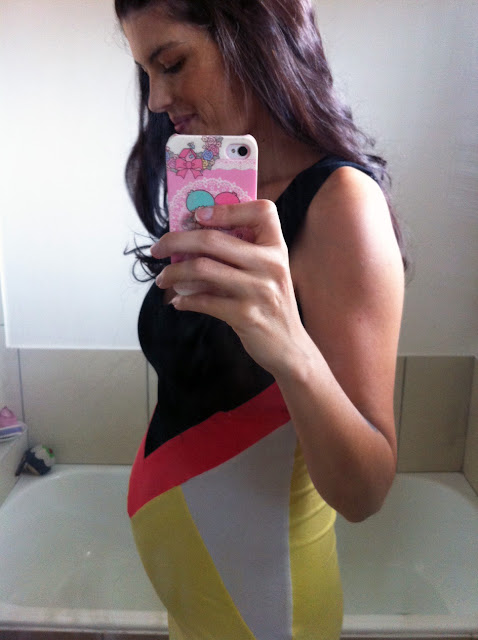 You know how you try to take a thousand photos, but your mirror’s dirty and your face looks lame and your kid is sneaking her head into the shot and you’re in a hurry? Well… that. But she was being awfully cute at my feet chatting to the cat. And hey look – there’s a bump! Promise that’s not pasta this time.

I now officially can’t fit into any of my jeans (PS if you have recommendations of good maternity skinnies, let me know!) and my shirts ride up just that annoying little bit. I loathe shopping though, so I’m hoping I can sort something out.

The inside baby is getting stronger and enjoying rolling around and poking me everywhere. We did find out the sex but I’m not telling anyone. I figured it’s the last time I’m going to be pregnant so it would be cool to make use of the technology. Also needed to know if I had to completely pack up Abby’s baby clothes or just wash them and put them back in the drawers. Given I’ve not done anything with her clothes at all except grimaced at the pile and hurriedly shut the closet door, I’m not entirely sure that works as an excuse!

Speaking of Abby, she’s totally not the outside baby any more. She is becoming an actual toddler. Just today she’s started walking greater distances, picking herself up without the aid of anything and choosing walking over crawling a lot more. She’s chatting heaps, repeating everything she hears and tries to sing the alphabet, which is possibly the cutest thing I’ve ever heard. She knows about 20 words, and uses about half of them at the appropriate times, unprompted. I’m absolutely enthralled with watching her learn.

I’ve been trying to teach her age-appropriate (she’s 14 months) independent tasks just so she’s a little bit more self-reliant for when the new baby comes. Things like using a spoon, and getting her to come to me when I say her name rather than going to pick her up from ripping all the toilet paper off the roll. I just don’t know what I’ll be experiencing with the new baby, so the more cohesive we are as a unit, the better for all involved! However she will be 18 months, so I’m expecting a hell of a lot of general 18-month-old behaviour anyway.

I had a little moment the other day when she and I and her dad were all playing in her room and he got up to leave. She crawled after him, stopped, looked back at me, then continued on her way. I got the real sense that it was a profound moment for me – I remember all those years ago learning about attachment, and that a secure attachment manifested itself in a baby confident to leave their mother and explore, knowing that she was always there. I also remember thinking even though I was only 20, I was going to make sure that when I had babies, that’s the kind of attachment they had. Twelve years later, I saw that become a reality. It was a really good feeling.

Speaking of feelings, I’ve been pretty good, with the odd exception of a sporadic but gross emo day. Usually when I’m very tired. Semester ends tomorrow, so I will be cutting back to working one day a week instead of two. Doesn’t sound like much, but it’s gonna make all the difference in the world, especially now I know how fast time goes and how soon I’m going to be feeling like a whale that’s actually fallen out of its transport carrier and is being dragged along the road behind the truck.

Now, if I could just get myself a chef and a masseuse, and possibly someone to clean my bathroom, I’d be in a pretty good spot indeed. I really am taking each day to be grateful for this unique time in my life and to really experience it. I’d just be able to experience it a hell of a lot more if I wasn’t scrubbing a shower.