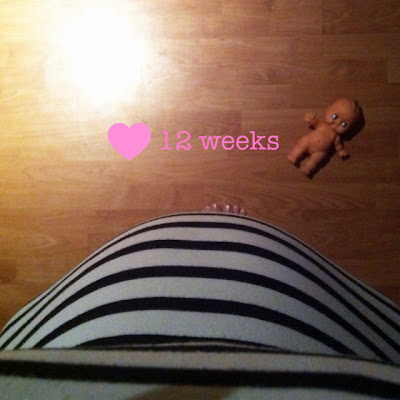 I know they say every pregnancy is different, but it’s interesting to have them so close together and really be able to compare.

For starters, last time I knew before the strip turned pink that I was pregnant. I could feel changes in my stomach and I was breathless almost straight away. I took what was supposed to be a leisurely ride through a gorgeous park in Vancouver, and slogged away miles behind everyone else, unable to breathe or catch up, or even look like I was remotely enjoying myself while small children and elderly people whizzed past me on either side. Things immediately were different.

And when morning sickness hit bang on 6 weeks, I was rendered useless. I would sleep late, get to work with the barest minimum of self-presentation, slump in my chair for 8 hours moaning and drinking ginger ale, go home, sleep, cook dinner that I wouldn’t eat, and go back to bed.

As many of you know, with this pregnancy I didn’t even know I was pregnant. Until 8 weeks. Until extreme exhaustion and dizziness sent me to the doctor, who said pretty much: “duh”. The only time I had an inkling was the night before my appointment and I was groaning on the couch, wishing I hadn’t eaten my bodyweight in mashed potatoes and gravy for lunch. Before bed I ate a piece of toast with vegemite, and as I was eating, I felt better.

I was vaguely reminded of morning sickness, where I ate endless boxes of Cruskits with vegemite because I felt somewhat normal if I ate them constantly.

The next day I bought a box of Cruskits and a pregnancy test.

I don’t know whether it’s breastfeeding hormones or what, but I just didn’t feel any different. In fact, until about last week, I still probably wouldn’t know I was pregnant. I think eventually the constant ladies’ room breaks and severe lack of appetite would probably have made their way to my fatigue-ridden brain and started to make some connections, but I can’t be sure.

It was only last week that my stomach finally went from I-just-had-a-baby-jiggly to I-ate-too-much-pasta-at-lunch. Last pregnancy I had pretty much no traditional symptoms, and no cravings. Nowadays I can smell a soiled nappy and cat food that’s been in the bowl just a little too long from three rooms away. I get up and immediately have to sit back down because my vision goes black and my head spins. I pack lunch and when I open it at work, don’t want a single thing and end up buying a vegemite sandwich from the cafeteria. I’m rarely seen without a cup of Ginger Snap tea from The Rabbit Hole, although my morning sickness is about one-third of what it was last time.

Things are so different, and it’s interesting to compare.

Oh, the thing that’s not interesting, and can get lost as far as I’m concerned, is the fact that I’ve completely skipped the incredibly fabulous coma-like sleep the first trimester brings every night, and gone straight to the last-trimester insomnia where you’re awake for two hours at 4am and wondering if you should just get up already because you could never sleep with your stomach rumbling like that anyway.

I don’t suppose it’ll change much – with two babies 18 months apart, my educated guess is that I won’t sleep for at least the next five years anyway. Might as well get used to it!