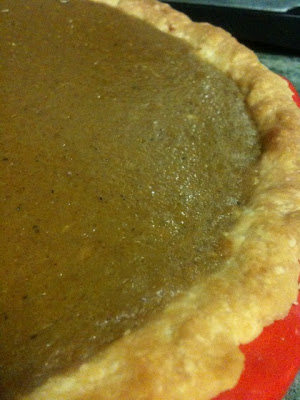 I have to admit, I held out on this pie for a really, really long time. I mean, it’s pumpkin. It’s a vegetable. It’s not a dessert. It goes with gravy, not whipped cream.

Well, I’m pleased to announce I was wrong. This is one versatile veggie!

I still find it funny when I search for pumpkin on American recipe sites and iPhone apps, and am bombarded with dessert dishes. I just never grew up with it served in that way, and sometimes it just looks and sounds plain wrong. Like pumpkin pie. But I’m now pumpkin pie’s biggest convert and loudest advocate. I’m not sure what any other pumpkin pie tastes like, but this was the first one I ever made, and I hit the jackpot when I did. Look no further, this is the most ridiculously delicious pumpkin pie on all the Earth. I swear. In fact, it’s 10.30 am and I’ve just talked myself into eating a piece right now. To hell with waiting for dessert.

1. Preheat oven to 200C and position a rack to the bottom of the oven.

2. Organise and pre-bake your crust. I usually bake mine 10 minutes until just golden.

3. Put pumpkin, sugar and spices in a pan, heat until simmering on medium, and cook until thick and shiny, about 5 minutes. Stir often.

4. Whisk in cream and milk and simmer.

This year, I made a Betty Crocker pie crust – recipe here. My tip – if you’re using butter instead of shortening, use unsalted.