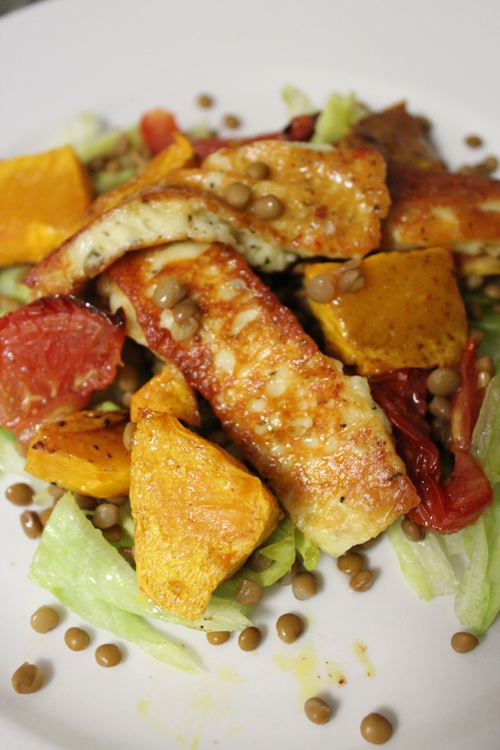 Once upon a time I was the editor of a small newspaper in a small town. The small town had several cafes, but I frequented just one – the one that had a roast pumpkin and haloumi salad on its extensive menu. I never once deviated from this choice in all the times I went there – which is incredibly strange, as I love to try new things. I just couldn’t stray. If I was to meet someone for lunch, it was to this cafe I’d go, and to my beloved haloumi I would remain loyal.
One particular day, I was racing to get the paper finished by my 1pm deadline. Deadline days didn’t usually leave me much time to eat, save whatever snacks I had stashed in a drawer, or whatever lunch I brought from home, microwaved in fits and starts, and mouthfuls eaten sporadically between work. It usually went cold and I would sadly poke at it at about 1.02pm. This day though was hectic. I drank about nineteen cups of tea and tried to forget I was hungry. As soon as that deadline hit, and I saw the last page disappear into the printing ether, I raced out the door and flew down the street in record time. Which hard to do in small towns. People want to stop you and chat. Particularly when you’re the editor of the very popular (and slightly controversial) paper. I am sure I may have made a few more enemies that day, but I didn’t care, all I wanted was the pumpkin and haloumi salad, and ain’t nothing was going to stand in my way.
I don’t even remember eating it. But I’ve no doubt it was good.
As is this one – the salty crispness of the haloumi pairs so well with the smooth, sweet pumpkin and the lemon dressing really adds another dimension of deliciousness. Very easy to throw together, and you can add whatever you fancy to flesh it out – this recipe should just be a guide.
Ingredients:
4 cups chopped pumpkin
Several handfuls lettuce
1 can lentils, rinsed and drained well
2 ripe tomatoes (cherry tomatoes would be even better), quartered
2 packets haloumi, sliced
Juice of 1 lemon
2 tablespoons honey
1 teaspoon olive oil
Directions:
1. Roast the pumpkin and tomatoes in a 220C oven 15-20 minutes until soft and just starting to brown, turning once. I dusted mine with cinnamon, chili and sea salt.
2. Arrange the lettuce, lentils, tomatoes and/or whatever else you’re using on plates.
3. Mix the lemon juice, honey and olive oil.
4. Fry the haloumi over medium-high heat until browned on both sides, a couple of minutes.
5. Top the salad with haloumi and dressing.
I only had sad little iceberg lettuce today (thanks so much, Brisbane floods/Queensland cyclone!) but I would totally recommend a nicer lettuce.
Previous Post: « Award Season
Next Post: Gnocchi with Summer Vegetables »