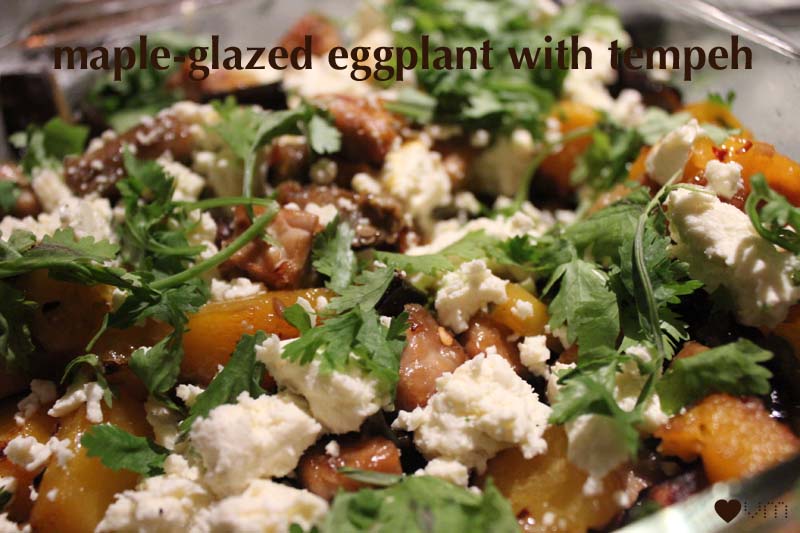 I fell in love the minute I saw this book. And I don’t say that lightly … I’ve seen a lot of cookbooks that are either vegetarian or predominantly vegetarian and I’m usually mightily underwhelmed.This one is packed with super-healthy ingredients, but made to look delicious and decidedly un-scary – an absolute requisite in my case. The photographs are beautiful and understated and make me wish I lived in San Francisco, which I’m sure isn’t the first time something’s made me feel that way.

I made this eggplant-and-tempeh dish because her picture was insane, and it had the word “glazed”, and not only had eggplant, which I adore, but also tempeh, which I am trying to like. And lemon zest and garlic and chilli and coriander and feta and oh my god I can’t resist.

All the recipes are that ridiculously good. I’ve also made the buttermilk cake, which is so moist (I hate that word, but can’t think of another to accurately describe!), with a hint of lemon. It even called for wholemeal flour which usually makes me cry in baked goods, and I found there were a distinct lack of tears. From me and Veggie Dad’s staff party, who thoroughly enjoyed it. I used rapadura sugar instead of caster and thought I was so hippie all my Apple products would immediately disappear into thin air, leaving paperbark and sharpened sticks in their place.

Heidi says Super Natural Every Day is for people who want to eat healthier but haven’t quite made the jump from an “all-white” pantry, which we all know is bad. After my recent foray into brown rice, wholemeal flour was the last thing on my list to endear itself to me… I’m getting there.

There are almost 100 recipes based around whole and natural foods. Breakfast, lunch, dinner, snacks, baked goodies, drinks and bits and bobs at the end – there is something for everyone. I had it on my kitchen counter for about a month, every time I went shopping I flicked through for a bit of inspiration. And a reminder to buy things like sunflower seeds that I know i should eat but always forget.

Originally, this dish called for pomegranate glaze, but I didn’t have any, so used maple syrup, which the recipe recommended. Oh boy.

2. Mound the eggplant, tempeh, pumpkin and lemon zest on a rimmed baking tray.

3. Start making the glaze by sprinkling the salt over the garlic. Chop and smash the garlic into a paste using both the flat side and the blade of your knife (I used a mortar and pestle). Combine the garlic paste in a bowl with the chilli flakes and pomegranate molasses/maple syrup. Whisk in olive oil. Drizzle 3/4 of the mixture over the ingredients on the baking tray. Toss well and arrange in a single layer.

4. Bake for 45-60 minutes, tossing everything at the 35-minute mark, until the eggplant and pumpkin are soft and starting to caramelise.

5. Drizzle with the remaining pomegranate glaze, sprinkle with coriander and cheese and serve.