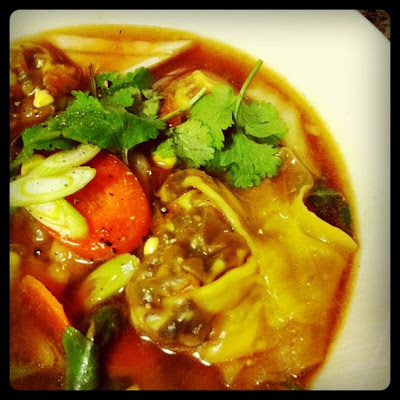 I was that freak wandering up and down the streets of Melbourne CBD recently looking at all the places that may or may not sell soup. Specifically wonton soup. The sad part was, it was about 7am and apparently places that sell wonton soup in the CBD have this thing were they don’t open at that hour of the morning. I know! I couldn’t believe it either. I wanted that soup so bad.

The community in which I live is more “let’s surf for three days straight then get a beer and some chips”, as opposed to “where would you like to eat tonight dear? Malaysian? Korean? Italian? How about some Ethiopian?”, which I have to say is much more my style.

It’s usually left to me to make whatever it is I’m craving, because it just doesn’t exist where I am. And now that Veggie Baby is on board for the ride, it’s not as easy to pop to Brisbane or somewhere similar for the day to get my fix. It’s much more of a production and she wouldn’t like the soup anyway, so it’s back to the kitchen I go.

With my head full of wonton soup needs and my chest full of cold and/or flu, shit was about to get serious if I didn’t make this soup a reality. I needed that soup like a flower needs the rain, like a poet needs the pain, like I need a new simile.

Not having any meat in the soup makes it a bit tricky flavour-wise, but with a good stock and plenty of onion, garlic and ginger, anything is possible. This soup filled my requirements, and when I posted a picture to Instagram, I even had people from the US demanding to be flown in to eat it. Trouble was, I wasn’t going to share my soup with a single soul. NO SOUP FOR YOU!

Except if you make it yourself…

1. Process onion, garlic, ginger, chillies and coriander root in a food processor until mush. You could alternatively use a mortar and pestle to crush.

2. Fry this off in a little oil for a minute or so. Add your liquids and sauces.

3. Bring to a boil and then simmer while you make the wontons.

4. For wontons, fry the mushrooms, carrot and garlic in a little oil until soft. Add sauces and sprinkle cornflour over, stirring to combine and slightly thicken.

5. Lay out your wontons and spoon a teaspoonful of mushroom mixture into the centre. With your finger, run a little water around the edge and then fold in half, sealing the edges tightly. You can scrunch them up or fold the corners together to make neat little wontons.

6. Either cook your wontons in the soup gently with the extra vegetables (carrot, etc) 3-4 minutes until all are cooked. If you’re a purist (some people don’t want the flour on the outside of the wontons to mess their soup up), cook them in boiling water before adding to the soup.

7. Check for seasoning and adjust to your taste. Add coriander and any other garnish. Fresh chilli would be good.

8. Serve immediately. If there are going to be wontons left over, I would freeze them immediately and put them into the soup to reheat later. I wouldn’t cook them and leave them in the soup or it will go all mushy and awful and you will curse me until your dying day. I can’t have that!

Previous Post: « Where in the World is Veggie Mama?
Next Post: I Died at Lord of the Fries »