While I totally dig a kid party, I’ve not got a lot of experience being at the helm of them.
I did throw a Cars 2-themed party a little while ago, but left it mostly in the hands of my party-savvy sister.
What I DO know is party food. Especially kid party food. But I am old school and I don’t make smiley faces out of things and elaborate cupcake animals, though that may come later.
No, I’m good at thinking its 1985 and basing the menu from that. For my 30th, the food was exactly the same as what was at my first birthday party, give or take a few things. I wanted to go as 80s as I could, even if most people were frightened of the red and green pickled onions. Now I just cast my mind back to whatever I ate at parties as a kid and figure “that’ll do”. 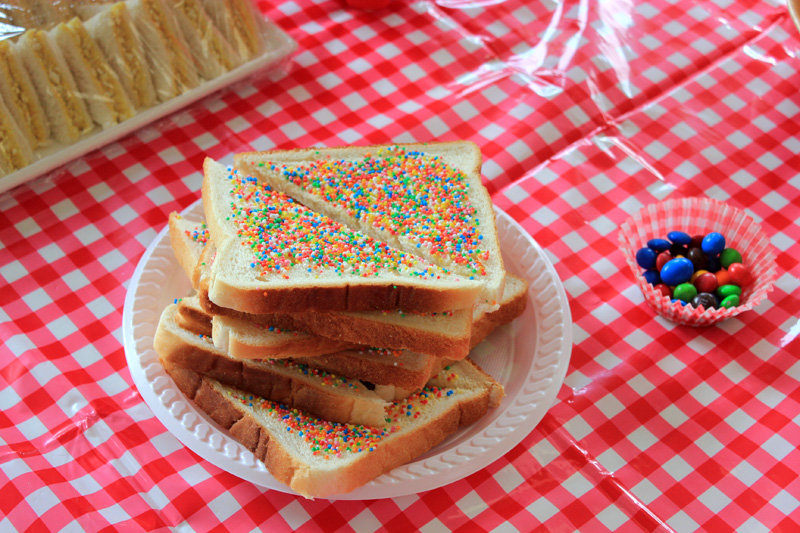 Now I, for one, loathe fairy bread. Someone else had to make this, I didn’t even think of it. I’m not into the idea of a sugar sandwich… probably because I’m not into sandwiches. bread… butter… sugar. I am shuddering. 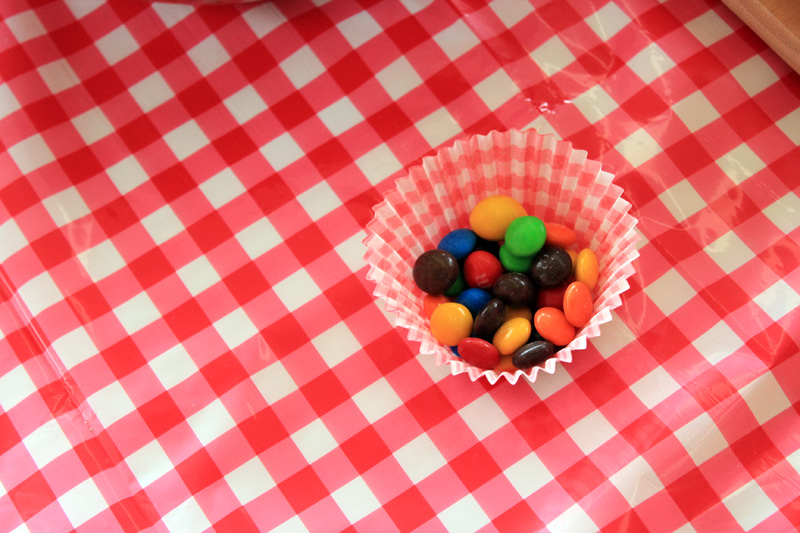 The one thing I do need to pick up my game on is serving dishes. Given that this party had a very loose gingham theme, I filled cupcake liners with candy. Not because it was cute or different… but because I had run out of bowls. 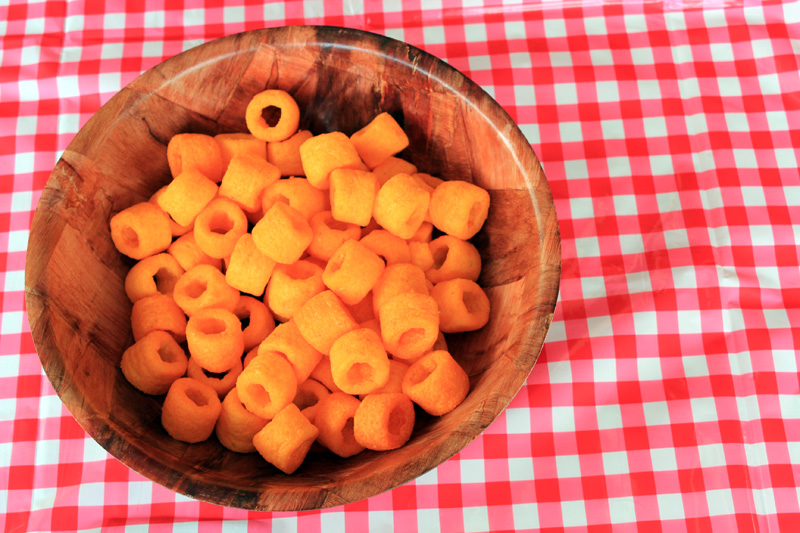 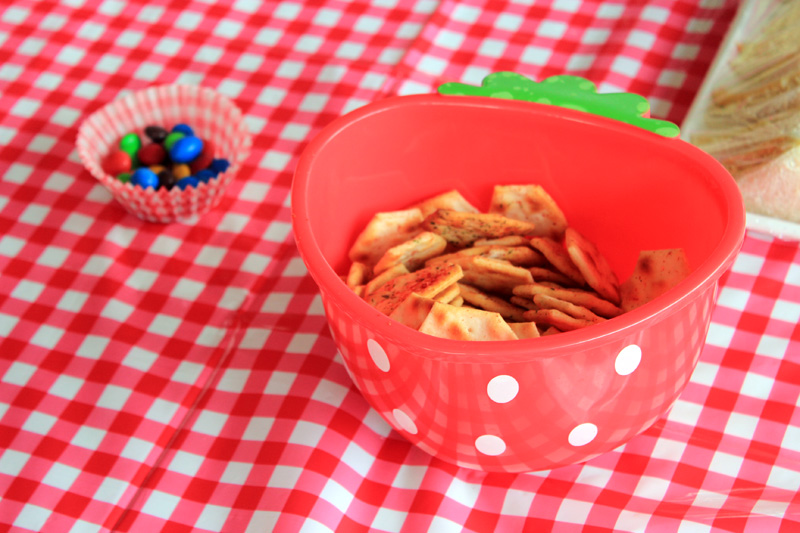 Barbecue shapes. In a colander shaped like a strawberry. That whole lack of bowls business.
Please note the three (THREE) plates of egg sandwiches. Half regular, half curry. Abby’s favourite … or so I told everyone. They were mostly for me.
They are her favourite though.
Honest. 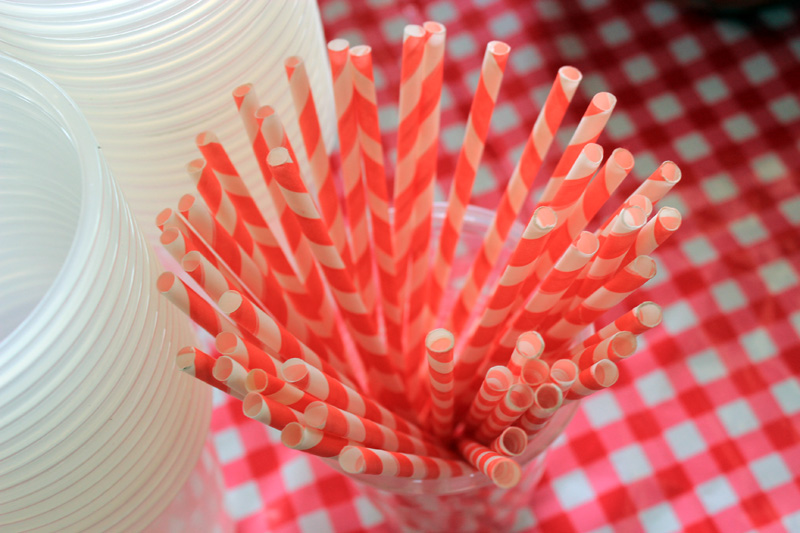 HOW fabulous are the girls from Lovely Little Parties, who sent us these straws, the tablecloth and party bags when they heard I was having a gingham-themed party after being inspired by their website. SO kind of them. 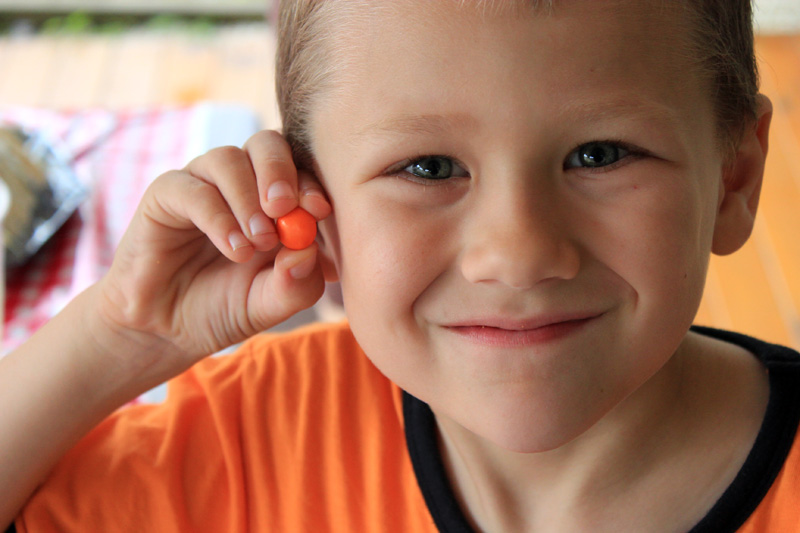 The candy was a hit with my nephew, who put a lot of effort into making sure all the gingham cupcake wrappers had an even amount at all times…
But the funnest part of the day was when I was trying to make a red-and-white checkerboard cake with white frosting, so when you cut into it, it looked like gingham. And I baked two cakes and did various other things for the party, and the baby wouldn’t sleep and I was trying to keep her away from the oven, and I cut the cakes into strips and made the frosting, and had to make extra because there were two cakes, and I needed stuff to make the strips stick together and I piled them all on carefully, pasting between them with frosting, all the while with a baby hanging off my leg and putting god knows what in her mouth, then I trimmed the cake and kept assembling it and the baby kept crawling to the oven so I put her in her walker, put the last row of the cake on, along with the frosting on the top and sides, and watched that row repeatedly fall over and refuse to stick. And I was getting frosting everywhere and bits of red cake were bleeding into the white frosting and I wondered if I could save it but end up throwing the lot in the bin, and turn around to see this: 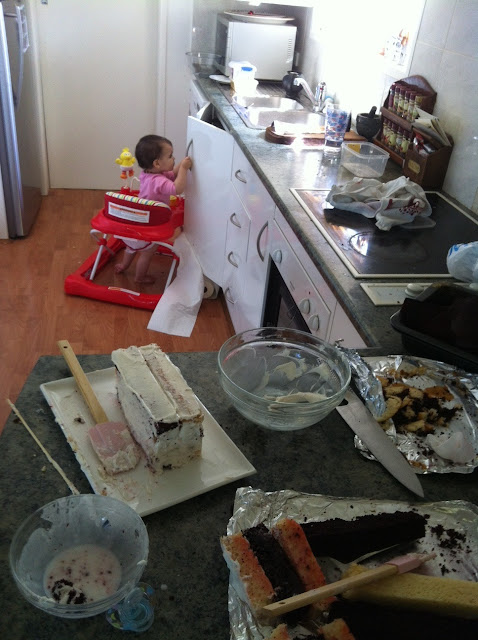 The baby unrolling all the paper towels ever made in the whole universe.
Oh and as a side note – if you want to have a whinge that putting my kid in a walker every now and then is bad for her, or bad for her hips or her development or whatever else you’d like to say, don’t worry because somebody already took the time to tell me on instagram and I took the time to tell them I don’t care. I highly doubt the 30 minutes she’s in it every week is doing anything except giving her better access to paper towels. 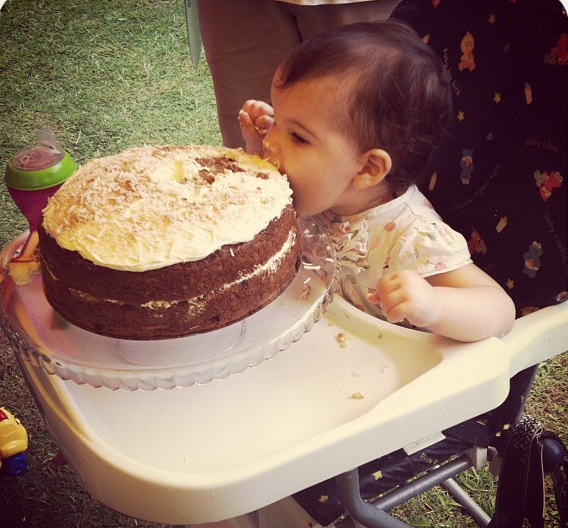 Anyway, we bought a cake and presented it to her and she dived straight in like nobody’s business. I was expecting her to slap it around a bit and possibly try to feed herself, but definitlely wasn’t expecting her to attack it mouth-first.
Yay for birthdays!
Previous Post: « Inside my fridge
Next Post: Had a traumatic birth and facing a second? This might help. »