One of my favourite things to do besides cook is read. And the older the book, the better. My two loves often combine in antique or vintage cookbooks, which provide a lot of joy, but not a lot of recipes (beef tea, anyone?). I adore the old ads, the sensible advice, the ingenious use of staple ingredients, and just, well, the look of these books. So I decided this year to share some of my collection with you as sometimes they’re not just pretty, but downright hilarious, too. It’s sweet to look back at what mattered most back then – being an able housewife, a competent nursemaid to ill relatives, creating a warm and loving nest for your family, and 100 ways to make jellied salads. Boy did they love their aspic.

Being as I’m 32 weeks pregnant, I decided to begin with The Ladies Handbook, an all-round useful tome for women getting married, raising families, feeding the families, going through ‘the change’ and being always on the lookout for economical recipes. It’s adorable and it has surprisingly useful advice on pregnancy and labour (they assumed you’d be doing it at home) and how to care for your bonny bairn. 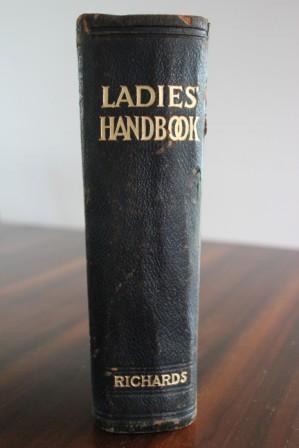 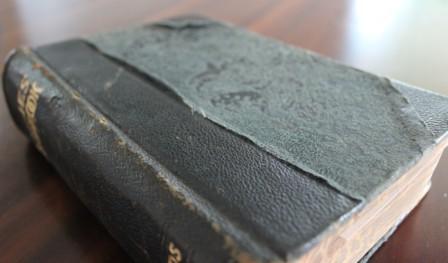 This particular issue was printed in 1947, and it’s full title is The Ladies’ Handbook of Home Treatment: containing the best modern methods for treatment of women’s and children’s diseases, with a comprehensive index of symptoms.
Thorough.
Anyhoo, one of my favourite features is this cutting-edge-for-its-time “manikin” of the pregnant female body, showing what goes on inside. 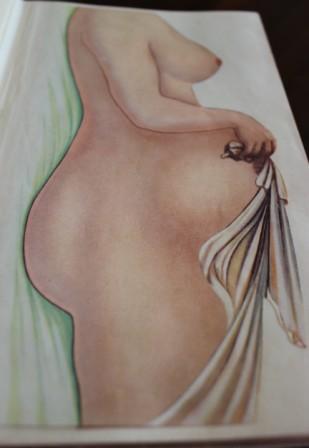 It also has some pretty graphic drawings of scabies and cancer of the breast, but in the interest of keeping your lunch down, we’ll leave those to your imagination.
Now, before we go leaping straight for motherhood, everybody in 1947 knew you weren’t doing it solo. So the first chapter helpfully describes how to go about getting yourself married to a respectable man who was going to look after you. We are informed that in choosing a partner for life, there were many things to be considered: one should choose a man of high ideals, noble character and a pure life; a man of sound constitution and good heredity. He should be of suitable age, of pleasing disposition, and one’s equal, but not one’s superior in social position. He should be a young man of proven worth, not flitting from one position to the other and making a success of none. He should have demonstrated his ability to earn a reasonable living and to provide for the necessities and comforts of a family.
Lucky for me I found such a gentleman before I had been informed of such requirements. Only nobody told me I’d also have to start watching rugby league, listen to punk music ad nauseam and be able to drink like a sailor. Added benefits, let’s call them.
Only kidding Veggie Dad, you rule.
Once you’ve been sufficiently wooed and you’ve embroidered yourself a lifetime of tablecloths, it’s time for the biblical sex-talk. You want babies, you understand how plants reproduce first. Then we’ll use these euphemisms to describe what goes on between the starched sheets. Seeds, eggs, nests, a baby is really just like a newly-sprouted dahlia. After leading you in gently, it actually provides some legitimate and correctly-termed information about pregnancy and gestation.
Now, we are reminded that the need of maintenance after marriage of the fight against excessive sexual indulgence is incumbent upon all. (No I’m not making this up). It is a natural instinct, as is thirst and hunger, but as we can careen dangerously into gluttony and drunkenness, as can we dive headfirst into sexual gluttony, which we’re told is utterly inescusable.
If you are chaste, clean, pure and morally upright, this shall be your reward: 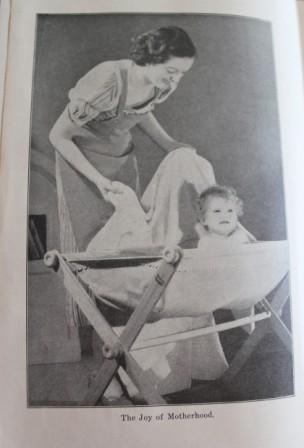 One is advised to get plenty of fresh air and sunshine as a pregnant woman, and eat sensibly. In fact, we are warned against eating too much animal protein, and to focus on fresh fruits, vegetables, beans and grains, as meat was thought to be taxing on the kidneys. What follows is a helpful section on vitamins and minerals, recipes for laxative treatments and advice on what to wear. It’s all much the same as what we are told now, except this interesting contraption: the abdominal belt.
For those who long for the support of the corset in the latter stages of pregnancy. No need to buy one ready-made, just wrap a towel around yourself, sew on some straps and safety pin yourself into abdominal comfort.
What comes next is the pointy end of the business – “the confinement”. Again, much the same as what we’re told now, except during the pushing stage, one is required to be bedridden, not getting up for any reason whatsoever. And there is a long list of things that need to be boiled and sterilised and that we’ll be unconscious by the time baby arrives, thanks to the miracle of modern painkillers, of which we have no choice but to be given. Oh – and it’s strict bed rest for two weeks post partum, eventually getting up here and there during the third week, with the baby only brought to you at feeding time, and no visitors.
I am firmly convinced that is is the reason my grandmother had eight children (Catholocism notwithstanding): she was hanging out for those three weeks where everyone would just leave her the hell alone.
We are instructed as to how to choose a nurse, and what sorts of qualifications and personality traits she should have. She should preferably look like this:
Care, bathing, feeding (fried foods and pastry are not suitable for young children, here’s a recipe for swede turnip juice) and keeping your child free from illness ensues. Puberty, middle age, and the menopause follows, and then is all neatly tied up with descriptions of just about every illness concievable, and some first aid tips. One hell of a comprehensive handbook for a lady indeed. Her and her family’s physical and mental welfare are considered and advice helpfully given. Perhaps one of the coolest things in this book is the inscription at the start, a reminder to all:
THEY say that man is mighty,
He governs land and sea,
He wields a mighty sceptre
O’er lesser powers that be;
But a mightier power and stronger
Man from his throne has hurled,
For the hand that rocks the cradle
Is the hand that rules the world.
-Wm. Ross Wallace.
Now try to stop thinking of Rebecca deMornay…
Previous Post: « Tomato Chutney. Or Relish. Whatever.
Next Post: Grilled Eggplant with Chilli and Garlic »