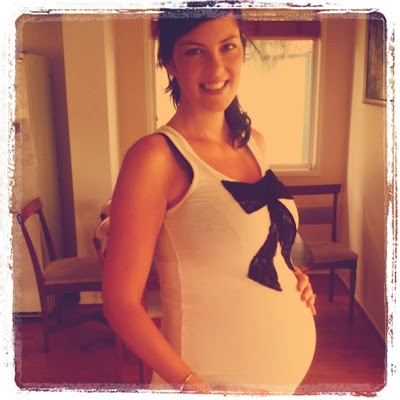 Because this should have been her.

We worked at the same newspaper company, and would send each other funny emails all the time to break up the monotony of the day. Ranty ones when our stories didn’t go to plan, bored ones, excited ones… but none were as cool as the ones we traded on our similar pregnancy symptoms.

We got pregnant at almost exactly the same time. Her by IVF, me – well, not that way! We were due a week apart. I rode the ups and downs with her of the IVF cycle, the hormones, the harvesting, the waiting, the disappointment when the first one didn’t take. When I was in Las Vegas and the strip on my test turned pink, I was worried. I knew she was taking a test that day too, and waited eagerly for a good news email. Fortunately, it had taken, and we were about to embark on the coolest thing ever, together.

We moaned about feeling nauseated at work, about how we, the biggest tea enthusiasts, couldn’t bear a cup. Our food avoidances, that weird feeling when you sneeze or laugh and it feels like something snaps in your abdomen. The overwhelming tiredness, our thoughts for the future… how we’d be pregnant in summer, how our feet would swell, how we’d live at the beach, how our children would always have a friend. Every step of the way, we’d have someone who understood, and who could share our joy and our mutual fear of haemorrhoids.

Things ground to a halt fourteen weeks later when results of an amniocentesis came back and she made the heartbreaking decision to terminate the pregnancy. The resulting experience was incredibly traumatic for her, for all of us. She writes about it so painfully and so eloquently here – but I’m not kidding, read with caution. I read it on my phone, outside, alone, and reflex made me fling it as hard as I could into a nearby bush while I sobbed, shocked and grieving for my beautiful friend.

I don’t know that I can ever read it again.

As the months went by, we didn’t know what to do. I didn’t know what to say, she didn’t know if she wanted to hear me say it. We’d send a cautious email now and then – vastly different to the multiple times a day of previously. We made tentative dates to meet for lunch, or an afternoon tea, and we’d try to be ok, and we would… for a while. I agonised over what to wear, I chose the baggiest, flowiest things I could find, never mentioned anything until I was asked, all the time feeling the crushing guilt caused by my mere existence causing my dear friend so much pain. I couldn’t get over the idea that every time she looked at me, she would see exactly where she would be had things worked out.

She wrote a post about how she felt about  me. You can find it here but you’ll need a hanky.

I was so proud of her when Veggie Baby was born. She and her partner and adorable son came over, held the baby gently, said all the right things, were so, so brave. I wanted to cry the whole time. Imagine how they felt when they left.

Now, almost 18 months later, I’m excited, elated, overjoyed to tell you she has just given birth to her own precious little baby girl. A girl who took two years of driving her parents to the extremes of human emotion, a hard-fought blessing, a much-wanted, much-loved, much-struggled for package of gorgeousness.

You can read her birth story here.

Now excuse me while I go cry.

No wait – if you have a problem with a devoted gay couple having a child, and enduring so much for the privilege, don’t you dare bother telling me. I’m not interested in hearing it.