I’m not gonna lie, being a latecomer to quinoa I was sort of just stuck in the idea that it had to be savoury or nothing. I made salad and burgers, kid “meatballs” and side dishes, but I was so wary of sweet dishes. I see people having quinoa like porridge or cereal and I was scared, yo. Like I didn’t want to make a batch of quinoa and waste it if I didn’t like it.

Well, folks… I do like it. I like it a lot. I even like its little pop-y texture even though that would normally make me itchy and want to phone my mum.

I made it vegan with coconut milk, and rice milk is good too, but if you’re into nuttiness, soy is great. Just remember that it will have an impact on the finished dish as it’s the main component besides quinoa. The traditional coconut milk or cream in the cans would be divine, or you could use regular milk. Whatever tickles your boat. The deep caramelly/toffee flavour of the coconut sugar is what’s going to make you fall in love, so don’t worry too much.

If the quinoa seems a little dry and non-pudding-like, add extra liquid at the end to reach a consistency you like. I’m pretty into things that aren’t stodgy, so I tend to add a fair bit when it’s all said and done. Great for breakfast or a little after-dinner coconutty goodness. 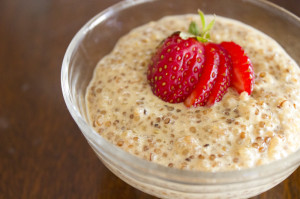