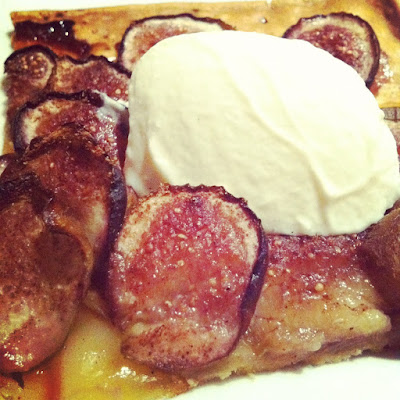 It’s a tart for lazy people. Like me. Like when I got a sheet of puff pastry, layered sliced figs on it and drizzled it with honey and put it in the oven till puffy.

That is a galette.

You can use any fruit you like – I used figs because I bought a whole bunch of fresh ones and they got soft very quickly and the baby didn’t like eating them. I wanted to halve them and top them with blue cheese and bake until all was a delicious sweet, salty gooey mess, but remembered I had no blue cheese in the house because I had to throw it out when I found out I was pregnant. I wouldn’t normally, but it was European and probably wasn’t pasteurised. I has a sad.

Anyway, I had some lovely cream just begging to be eaten, soft figs, a willing oven (I’m assuming it was willing, it did the job but I didn’t ask its preference) and some organic honey. And there was dessert.

Anyhow, if you’re using honey, don’t go crazy with it because it will melt and run off the galette and stick to your pan and burn and you’ll be sad and annoyed and frustrated and throw the whole pan out and buy a new one. I’m guessing, anyway…