Yesterday was a domestic one as I cleaned and tidied and baked ready for the first day of term today (still forgot Biggie’s reading folder though, I will literally never have it all together), and one of the things I was stocking up on was homemade crumpets, which made a number of you very excited indeed. 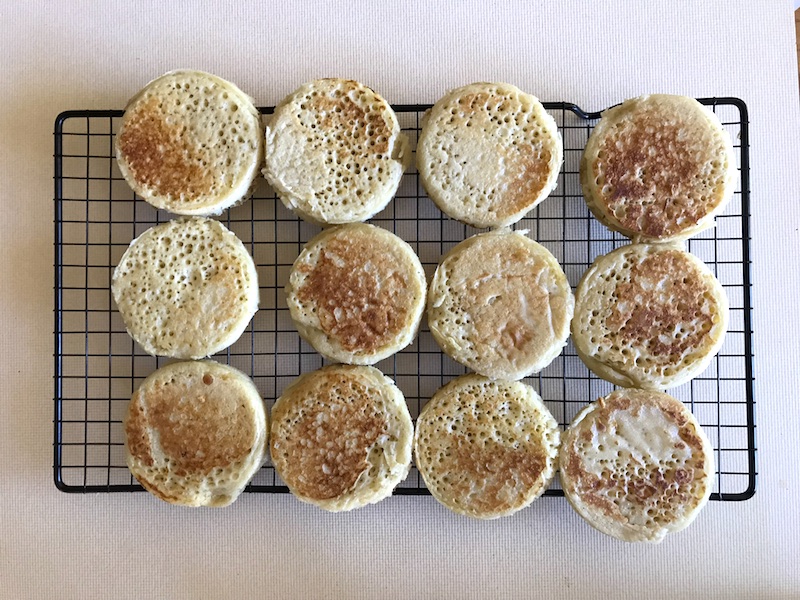 I was originally going to post the recipe tomorrow once I got my camera sorted (yes two of them are broken yes I’m devastated) but I got so many requests I thought I’d pop it up today instead so you can have hot little crumpets in your hot little hands a whole lot faster. It’s necessary.

Look at those delicious little holes, just ready for way too much butter and golden syrup.

What I think is different with this recipe of Elizabeth David’s from English Bread and Yeast Cookery to those I have tried in the past is the extra addition of bicarb and water after the initial rise. It definitely results in a lighter batter with many more holes, which is why it’s turned into my favourite, with the tweaks I’ve added along the way.

I usually make a batch and then stash them directly in the freezer, ready for action at any time. This recipe makes 12, but I have gigantic egg rings (which are terrible for eggs but pretty good for crumpets), so if you have the smaller, more common egg rings you’ll obviously make quite a few more.

You could also get dedicated crumpet rings, which do make them a little fatter and taller if you prefer – they’re pretty cheap too (that’s an affiliate link, btw).

My other tip is that they will cook best on cast iron rather than an electric frying pan or other stove-top pans. Try to get the flattest frying pan you can, otherwise you’ll find bits of your batter slip out the gap between ring and pan if the bottom is uneven. To combat that, turn the heat up as you pour in the batter and try to get it to set instantly and you’ll lose less batter. If the pan’s too cold it will just slide on out like Lindsay Lohan from a 2002 nightclub.

So go forth and crumpet. Or you could watch Dumb & Dumber, or make crumpets WHILST watching Dumb & Dumber. Because if I know Mary as well as i think I do, she’ll invite us right in for tea and strumpets!!

If I know Mary as well as I think I do, she’ll invite us right in for tea and strumpets!! Especially with this homemade crumpet recipe.

Previous Post: « I found it! My second pregnancy announcement, once thought lost to the mists of time
Next Post: This is how we do it »