If only that were true. In fact, I had to pay extra to cart all my goodies home. Six kilos of bento boxes, Hello Kitty hairbrushes and four hundred and seventy-five pieces of cute stationery. Seriously, the place is a shopping mecca. Everything screams “buy me! now!” and the stores are packed. I went to a shopping centre that was only for teenage girls and there was eight levels! It was intense… and full of fake eyelashes.
The Japanese, from what I saw, are phenomenally well-dressed. Hair perfect, pretty bows on shoes, a serious addiction to eye makeup and gorgeous coats. Men were looking sharp in suits and little kids were straight out of catalogues. It made me re-think my devotion to hoodies in winter!
The foliage was breathtaking, and filled the beautiful parks we went to. 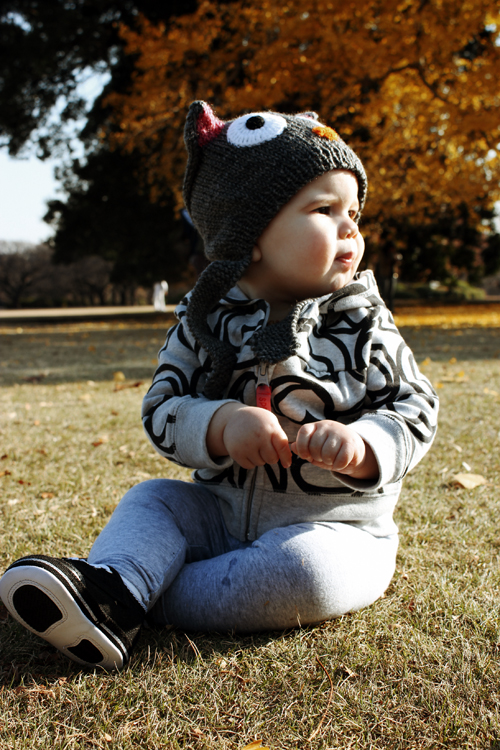 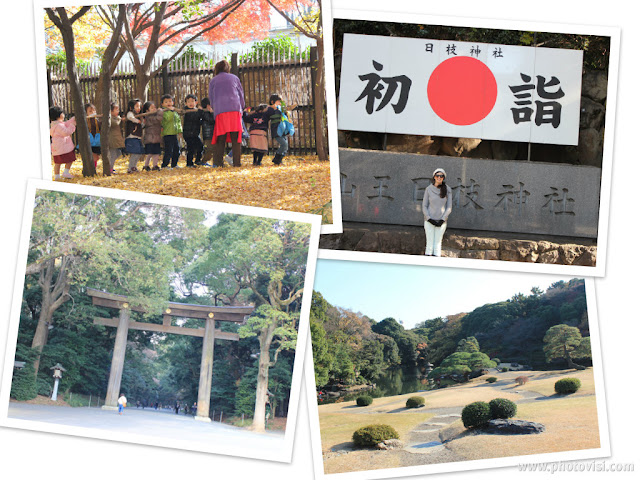 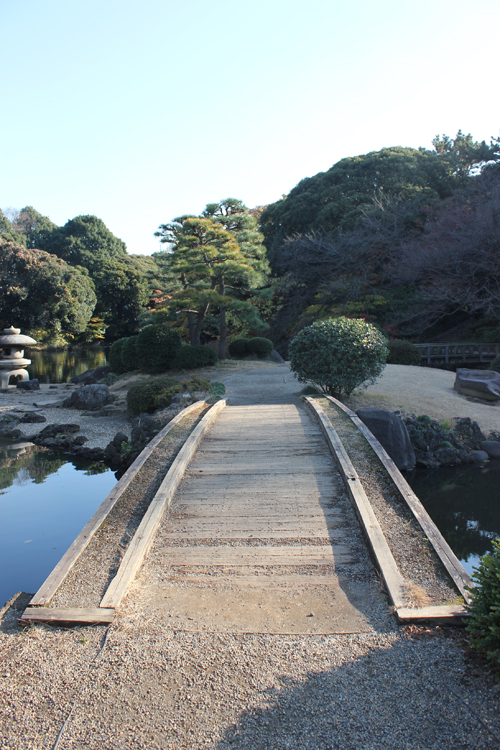 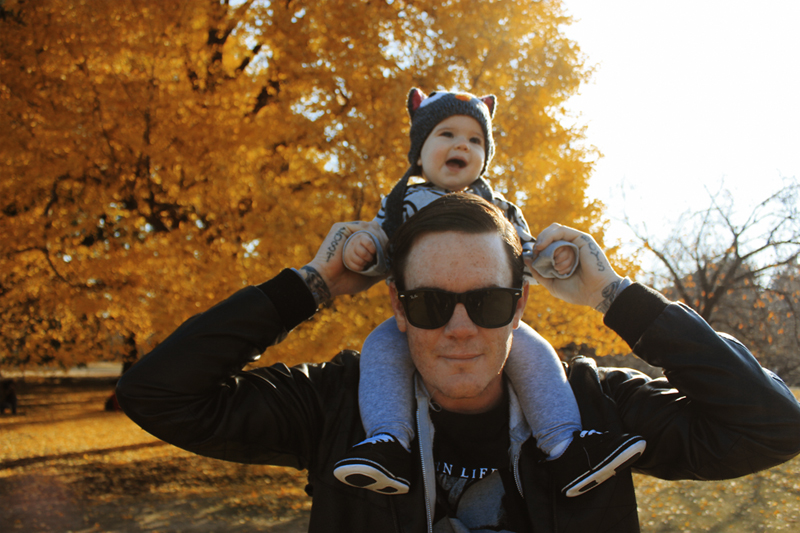 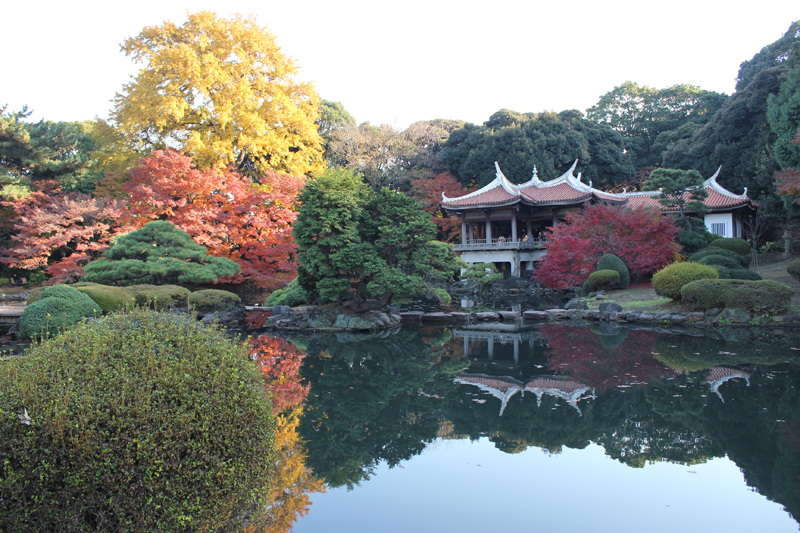 We definitely do not get this in Queensland! Trees are either green or brown. Or greenish-brown. 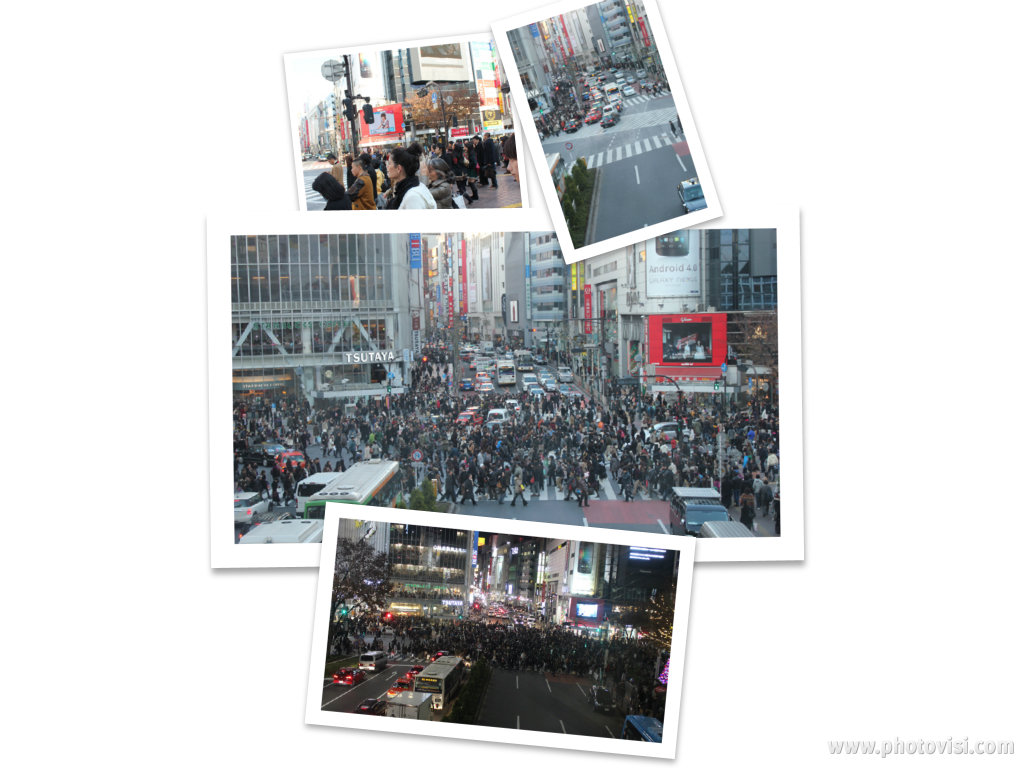 Shibuya was a sensory overload – no wonder they call it the Times Square of Tokyo! The thickest crowds, the brightest lights, the loudest TV billboards. I was invited to buy the latest single from Sexy Zone, and Afterschool Xmas, and some Pocky, among other things. The scramble crossing was insane, at some points I had to hang on to Veggie Dad’s bag so I didn’t get carried away by the tide. Lots of people going in lots of different directions! 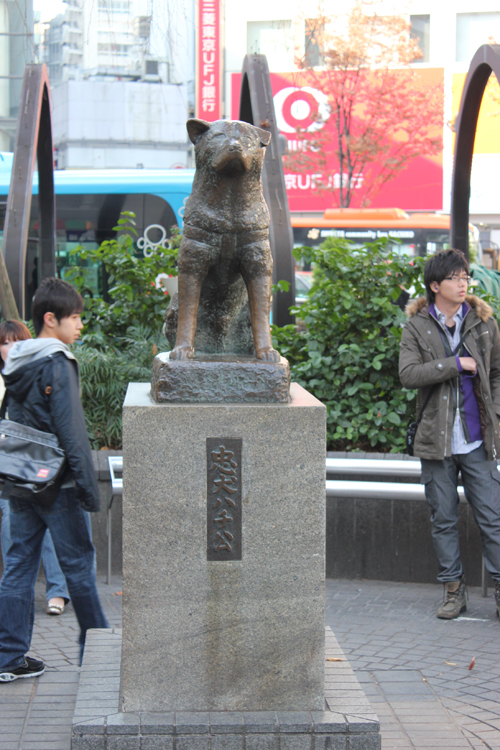 The statue of Hachiko was so sweet. I love the story – he was the much-loved dog of a Tokyo University professor, and would meet after work at the station every day when the train was due to walk his owner home. One day in 1925, the professor did not appear, having died from a brain haemorrhage. Hachiko continued to wait at the train station faithfully at the end of each day until he too died nine years later.
*sniff*
Tokyo DisneySea was super-fun. Seven ports, all very different, all very well-recreated. Mediterranean Harbour, American Waterfront, Lost River Delta, Port Discovery, Mermaid Lagoon, Arabian Coast and Mysterious Island were all so much fun to walk through and explore. We had the best time in King Triton’s cave, where everything was The Little Mermaid-themed and aimed at the younger kiddies. Veggie Baby had her first theme park ride and was nonplussed. Dad and I, however, were loving it. 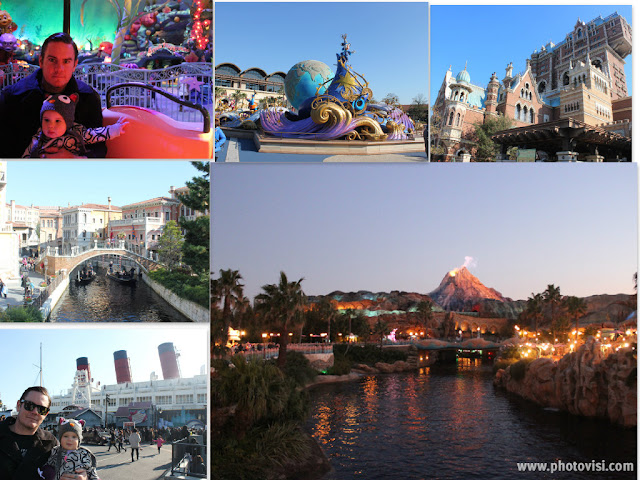 I wanted to go on the Tower of Terror ride so bad, and climb all over the S.S. Columbia, but the wait times were in excess of 70 minutes… so I consoled myself with some popcorn – one batch was black pepper-flavoured, and another was milk tea. Weird, but good! 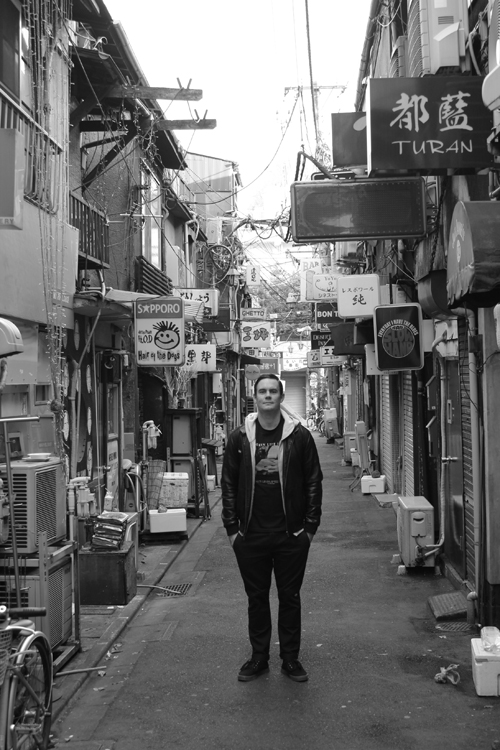 Shinjuku Golden Gai blew our minds and made us wish we had a babysitter! six tiny alleyways packed to the brim with even tinier bars for 4-6 people. I’m reliably informed you can order a beer and some metal music on the same menu and you can rock out in your cramped quarters. The doors looked like tiny fairy doors from an Enid Blyton book, only they were painted black and brown and had graffiti and stickers all over them. Punk fairy doors? 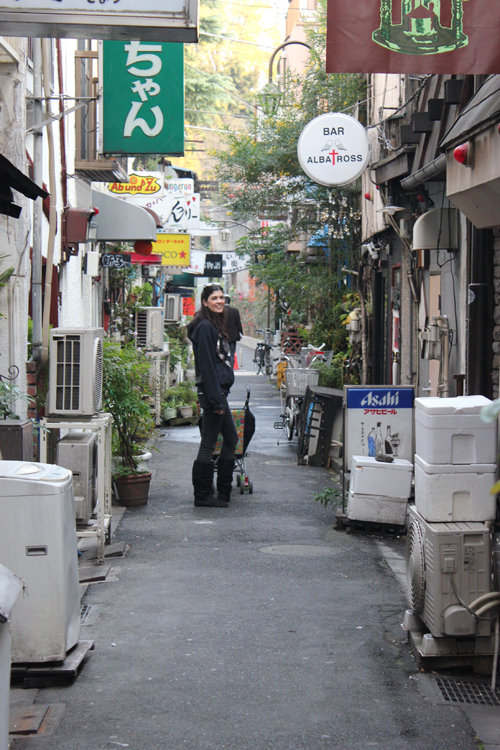 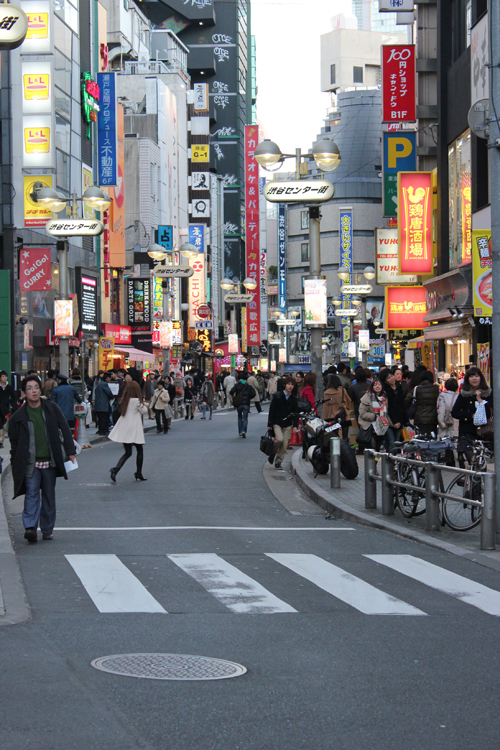 Even normal streets were terribly narrow and sidewalks even more so. If they hadn’t been so incredibly polite, I swear we would have been abused for daring to take a small stroller anywhere outdoors. As it was, we were restricted to the larger family-style eateries as most places were very small and compact. If you’re claustrophobic, I suggest you holiday elsewhere! I love cosy spaces so I was right at home. Even if Veggie Dad and I had to walk through the hallway in our room separately, never both at once… in fact, the only place we could both be in the same vicinity was the double bed! A crying baby seems eighty times louder in such confines. Still cute, though. The baby, not the crying. 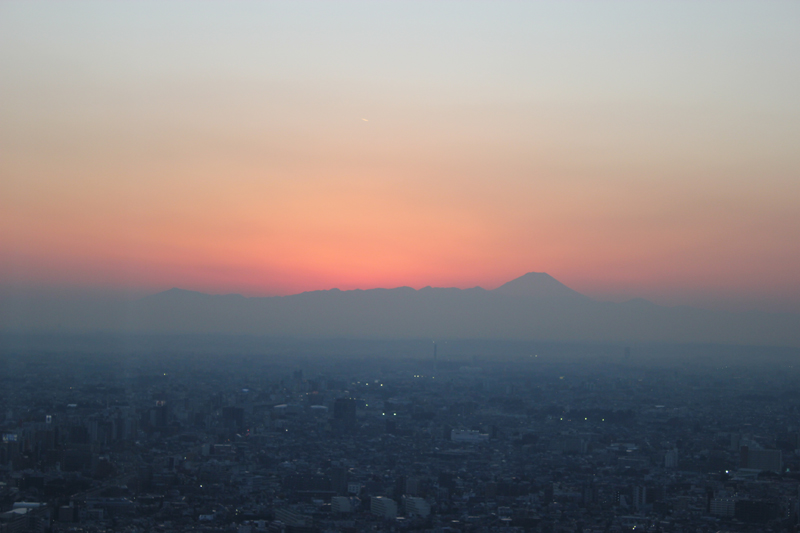 Sunset over Mt Fuji from the 45th floor of the Tokyo Metropolitan Government Building was pretty special. The city stretches out for ever in every direction. 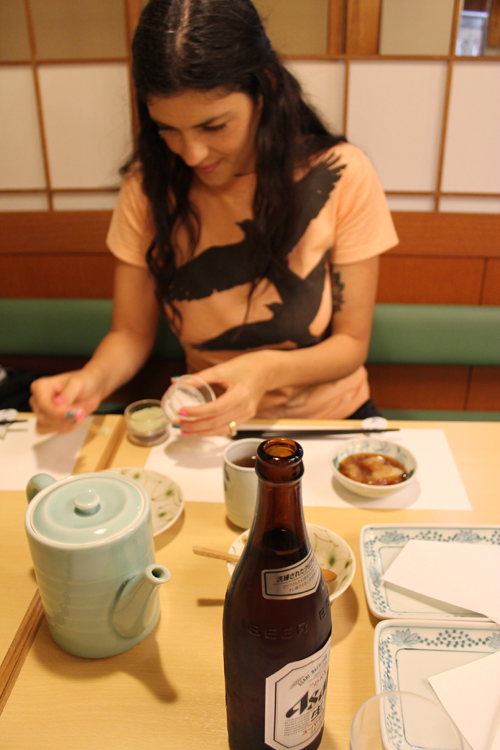 Sadly we couldn’t eat a lot of Japanese food, as there is meat and fish in everything. I figured we could eat tempura and just ask for veggies (yasai) instead of whatever they had. I learned how to say “I don’t eat meat” the last time we went to Japan in 2008, but they don’t see seafood as meat. (As an aside, that is usually the first question I get when people find out I’m vegetarian – “do you eat fish?” Why is this? Fish is an animal, no? If I’m vegetarian, why would I eat fish? Please explain!) After this dish was brought out with prawns and whitefish along with the veggies, I went home and learned how to say “I don’t eat meat or fish”!

And last but not least, Harajuku, Yoyogi Park and some serious shopping. We watched the rockabilly/Elvis dancers we first saw in this film clip a while ago (they are awesome!), lots of people wandering around looking cool, practicing their musical instruments, jogging, yoga-ing, hula hooping, rehearsing plays and several Japanese boy bands going through their moves. I went nuts in the Kiddyland toy store, bought two crazy cool vintage dresses and wondered if I’d ever get out of the streets alive… it’s a hectic place and the one that was most filled with foreigners. 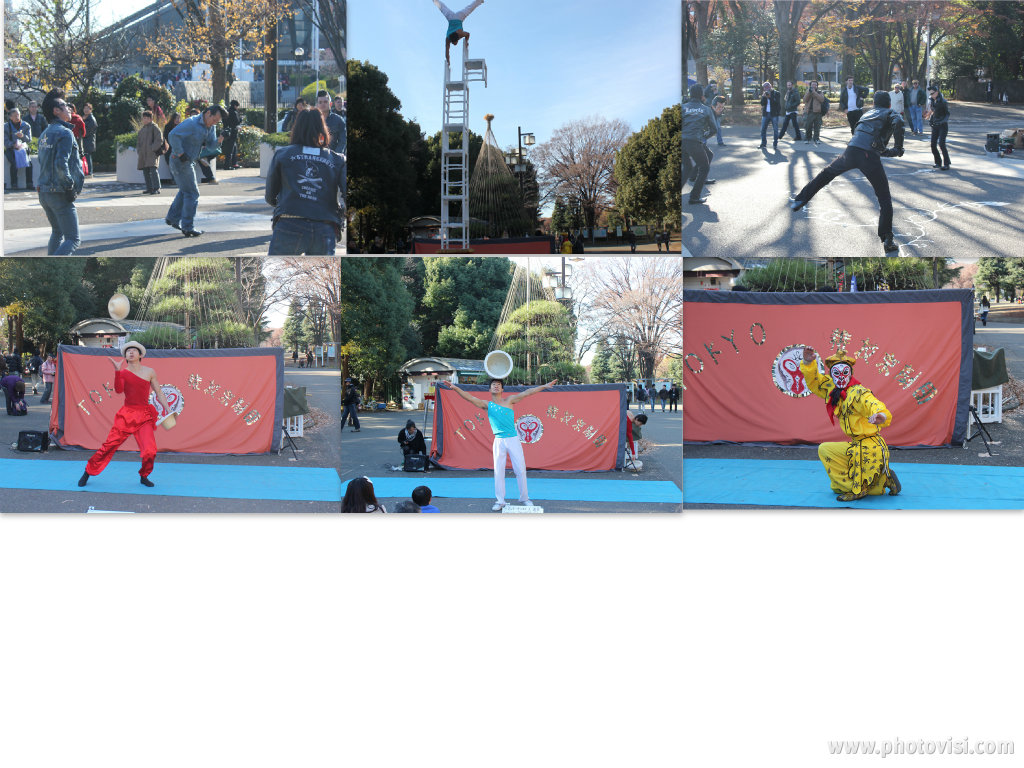 There was still so much we didn’t see… just going to have to go again, I guess…

Previous Post: « What happens when you leave your kid within arm’s reach of creamed corn… and Meatless Monday.
Next Post: Spinach and Mint Dip »