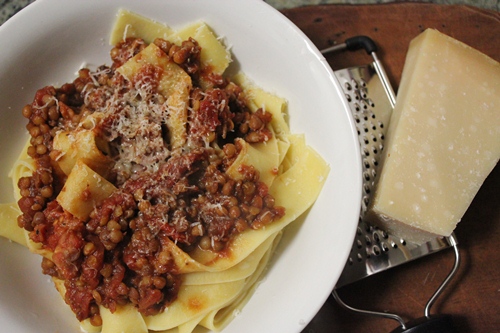 AND FOR THE LOVE OF GOD, QUIT CALLING IT SPAG BOG.

It makes me think of a toilet.

Mr Veggie Dad finds my bolognese aversion tough going, as he really likes it. And he makes a mean version too, just quietly. Sometimes I make similar sorts of things, like this lentil dish, and it seems to suffice. Want to cut down on meat? (And since when did mince get so expensive? I thought it was just snouts and tendons…) throw in some lentils. Add something, anything, for the love of god other than spaghetti and hey… even I might eat it.

Cover it in parmesan-style cheese and I’m your man.

You could make this even better (and I have), by roasting halved tomatoes until soft. Then squashing them with salt and balsamic and adding to the lentils. YUM.

It’s easy, quick and good for you. A delicious dish on a cold night with a sneaky red. You know you want to.

Heat some oil or butter in a saucepan and fry onion over medium heat until translucent. Add garlic and fry 1 minute.

Add everything else and bring to the boil. Let simmer for at least 10 minutes. The longer you do, the richer and better it will taste.

Cook pappardelle according to package directions.

Test your sauce for seasoning, add to pasta, cover the lot with parmesan-style cheese.

Seriously… am I the only one that doesn’t like it?