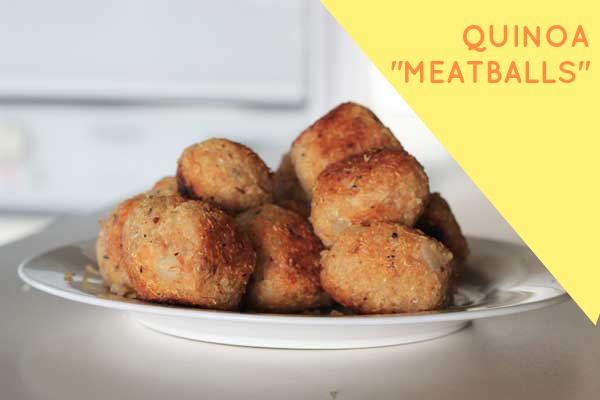 This is a recipe borne from cooking quinoa with too much water to the “you idiot, this is gluggy” stage, rather than the lovely fluffy grains I’m used to. Crossed with the ideas that came after these veggie-packed kiddo quinoa bites that were such a hit with my girls.

We had them with some sauce and a salad and called it a day, but they would be pretty fun with spaghetti, or as little appetisers with a barbecue-style sauce. They’re quite reminiscent of the rissoles of my youth (bring on the onion gravy), so it would all depend on how big you made them. As a burger patty I think they would probably be too soft, but hey, I’m not the boss of you!

Fun, savoury “meatball” style quinoa balls, ready for all your meatball needs! Excellent with spaghetti or with a dipping sauce.

Previous Post: « Give your mama some handmade/vintage love this Mother’s Day with a $50 credit from Etsy {ended}
Next Post: Autumnal, yo »