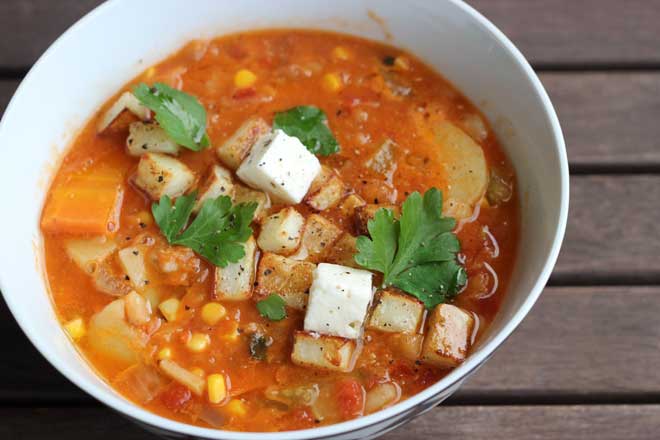 Ok so this soup can actually go two ways – and I like them both equally, depending on my mood.

Soup one requires about an inch piece of ginger, peeled and grated, in with all the aromatic vegetables at the start.

Soup two requires nothing but an extra sprinkling of feta at the end, and perhaps a spoonful of tomato paste in amongst the liquids, at some point.

The choice is yours! But the choice for crunchy-on-the-outside, soft-in-the-middle cubed roast potatoes across the top shouldn’t really be a choice. I mean, I’m all for the regular bready kind (done right, I ain’t tryna come at those dry little depressed dice shit from a packet), but roasted potatoes are rad. They’re also gluten free, if you need, and an extra serve of veg. I’m all about it.

Make a big ole batch, it freezes well. Except the potato croutons, make those babies fresh.