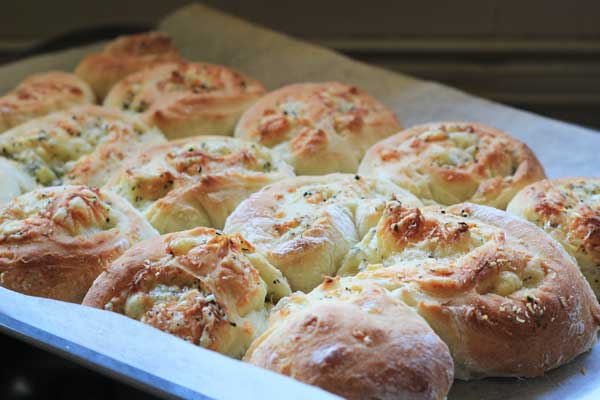 I got a bit overexcited when I received a breadmaker as a Christmas gift. While I still haven’t nailed a good loaf of bread in it, I have been totally putting it through its paces kneading endless amounts of dough for me. We’ve been making pizza on the regular, and these scrolls too. I’ve taken them to meetings when it’s my turn to bring a plate, we’ve had them for morning tea, for afternoon tea, and when guests arrive. I’ve also just stashed a whole unbaked batch in the fridge, to pull out when the need arises and bake fresh.

Sometimes I even find myself making a double-batch of dough on pizza night to make scrolls with for later. Only DO keep an eye on that business in the breadmaker, or it WILL rise over the top and out the edges and down the sides and before you know it, you’re covered in it and it looks like your kitchen has exploded. It’s anything but a-dough-able.

After that lame joke, I give you the recipe. Hopefully that will make amends.

A super-simple warm delight for cold afternoons. Nothing beats a cheese scroll! (Except maybe a cheese and vegemite scroll).

Previous Post: « VM vs Microdermabrasion and Chemical Peel – my experience (and 40% off for you!)
Next Post: Toddler Activity: Under the Sea Week »