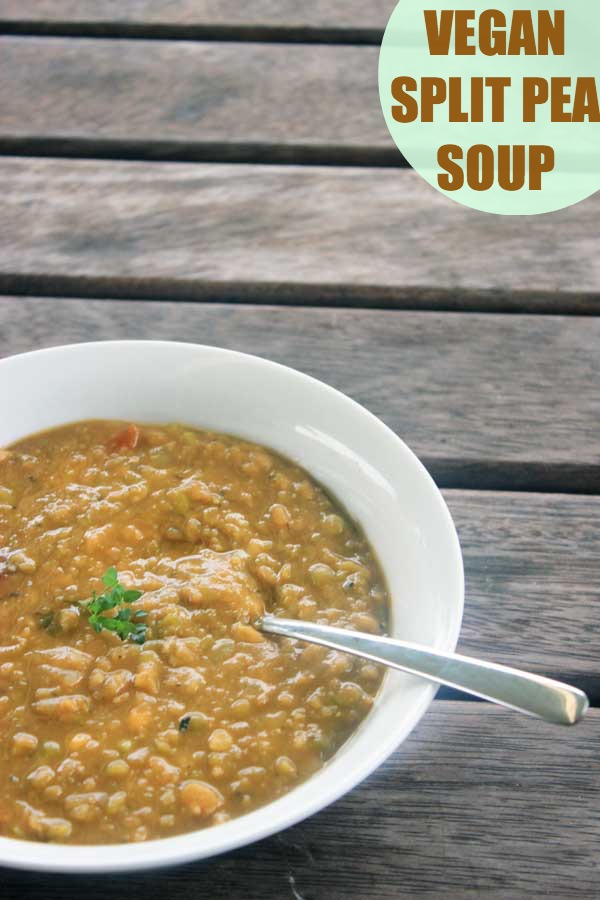 I don’t have very good memories of split pea soup (or pea and ham soup) from when I was a kid, for I was quite the food phobe. Plus, the version I had tried contained barley and barley was weird, man. There was one I liked in my early 20s, so I get the appeal, truly I do.

What I do have, however, have great memories of singing the pease porridge nursery rhyme, and this vegan split pea soup is sort of the same!

I needn’t have worried, because I eventually grew into it, and when I had the idea to veganise it for the crock pot, I realised how delicious it really is. I’m trying to think up lots of crock pot recipes this year, and I remember pea and ham soup being a bit of a staple in it growing up. I thought about how I would replace the smoky ham flavour, and then realised I didn’t really want a hammy-tasting soup. The smoke I like, the ham… not so much. I would normally use a liquid smoke for the same effect, but I’m all out, so I turned to my backup – smoked paprika.

Then I saw Veggieful had posted a vegan split pea soup recipe and figured I must have been on the right track! Do you read their blog? It’s irresistably gorgeous.

Anywho, if you’re up for a creamy soup full of flavour, then this vegan split pea soup is for you. Winter warmer at its best.

When you want a creamy, smoky, thick, chunky soup on a cold winter’s day, then throw this vegan split pea soup in the crock pot and you’ll thank me!