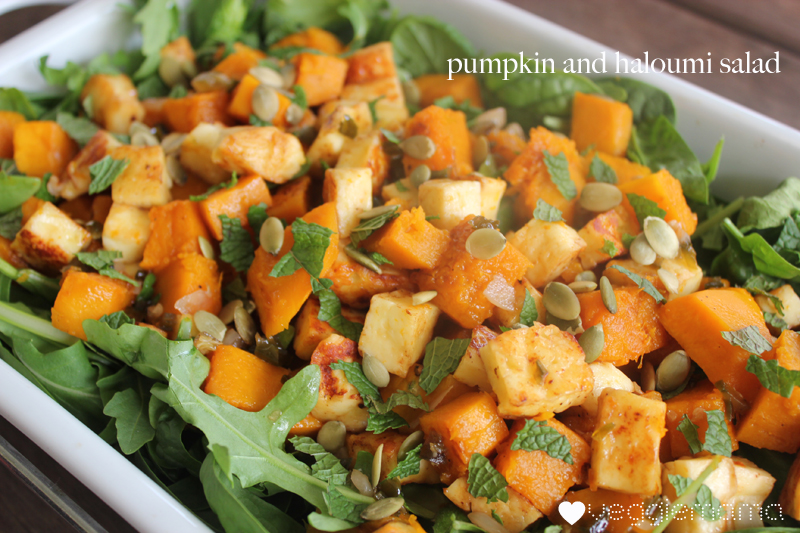 For some reason I can’t get out of the groove of making pumpkin salads and adding haloumi to them. It’s getting ridiculous, you’d think there was no other vegetable and cheese combination on earth. Way to be creative, Stacey.
Anyway, it’s good stuff, and I’ll keep making it until sweet potato gets an inferiority complex and shouts from the pantry “you don’t love me any more! I always knew pumpkin was your favourite” and slams the door. Attitude.
This one was invented when Mrs Woog came to town and was having a barbecue with about nine million of her nearest and dearest. It was loud, chaotic, full of excited kids and a whole lot of fun. I was tasked with salads, and I wasn’t about to pass up an excuse to use haloumi. Stuff is like crack.
It was the day of the hangover from hell, and once I imagined that oozy, salty gift from god frying and generally being delicious in the extreme, I had to have it. There was a good chance I was going to turn up, graciously offer the salad to the hungry masses, then surreptitiously and constantly pick the haloumi out of it when no-one was looking.
Sometimes it’s hard to share.
In a fit of extreme laziness, and a deep aversion to putting the oven on in stupidly hot weather, I fried the pumpkin. I’m reasonably certain nobody could tell the difference. Or they were too polite to tell me so. 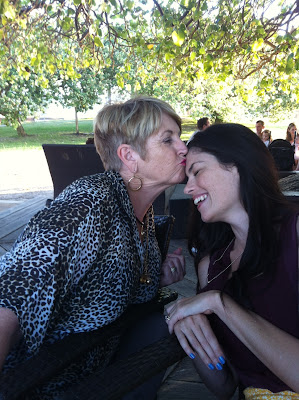 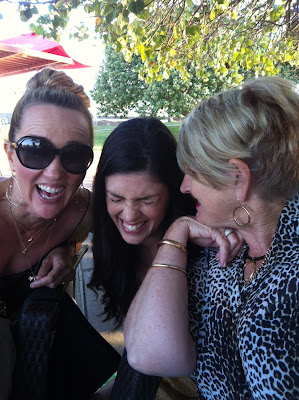 Look at this adorable human.

This is Mrs Woog’s mum. She liked me even though I have the longest fingers seen on any humanoid, and her daughter told me I swore too much. I also giggled inappropriately, drank too many martinis and lost several games of handball to her grandchildren. She liked me so much she adopted me, and I am now one about 17 girls she calls her own, including the impossibly fabulous Uberkate, shown above making me wet my pants.

My new mum said she liked my salad, and that’s all that counts.

1. Layer the spinach and rocket in a bowl or on a serving platter.

2. Add the pumpkin and haloumi and sprinkle the mint and pumpkin seeds over.

3. Drizzle with dressing and a little olive oil.

1. Saute the garlic and jalapenos very gently in some olive oil until soft – 10 minutes.

2. Turn the heat down and add the red wine vinegar. Let steep for 10 minutes or so, until some of the vinegar cooks down.

3. Add the honey and stir. At this point I was worried the end result would be too thick, so I tried to figure out what might thin it a little. Just as I thought “I bet I randomly think of something that isn’t immediately obvious and it works perfectly”, I sipped my Corona. Bingo. I poured in about 1/4 cup or so (maybe a little more) and it was just the thing.

Would YOU like me even though my fingers are longer than a monkey’s?
It’s ok if you wouldn’t.
really.
I probably wouldn’t like me either.
Previous Post: « Lemon Coconut Slice
Next Post: Five things I swore I’d never do when I became a mum. »