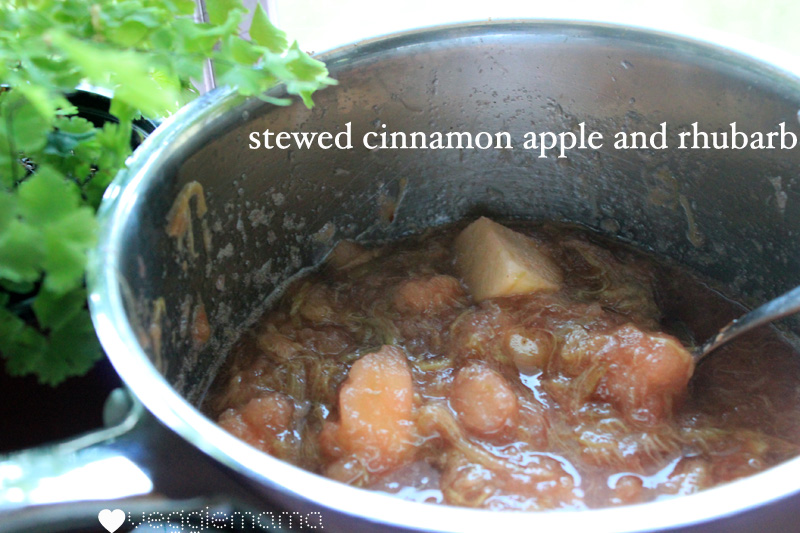 In an effort to get my kid to eat fruit other than grapes and blueberries, I thought it would be fun to stew some apple and rhubarb to make it soft enough for her to eat. I know apple pieces are a choking hazard at this age, and seeing her tender, raw gums I can’t imagine she’d enjoy chewing the hard little bits, so steaming or stewing seem to be the obvious option.

Having said that, every time we go shopping, she HAS to carry around a whole apple, or she’ll scream. She gnaws at it until she breaks the skin, then mauls it for a bit before throwing it into the cart behind us. I watch her like a hawk, but she really just seems to like licking the juice and nibbling like a rabbit.

So with that in mind, and some gorgeous rhubarb from the markets in hand, I made this for her. It was also a good basis to get some spoon/fork practice in, and I left the apple pieces reasonably large so she could grab them out with her fingers if she wanted. And she did. She absolutely loved this combination, especially mixed with organic yogurt, and she had it three nights in a row for dinner.

It’s so handy to have on hand, and freezes well. You can eat it plain, have on cereal or porridge, mix with yogurt, put into cakes or muffins… it’s just so versatile. And delicious! I may or may not have put a little scoop into some puff pastry and baked it. Yum.